Islamic Voice 0 May, 2016 12:00 am
Mismo -Perfection to your Theme
Ten Key Pointers from the Verdict 2019
Muslim Representation Slightly Up 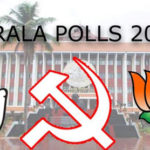 Will Kerala maintain the tradition of rejecting the incumbents in power and handing it over to the rival Front? The question is uppermost even as the India’s most literate, and by far the most civilized state, goes to elect a new Assembly.
A good many observers are of the view that 5-year tenure of the United Democratic Front (UDF) headed by Chief Minister OommenChandy was not particularly bad. But a few scams like the Solar Scam and Ban on Liquor Bars threw the spanner into the works. Some even reject their negative impact as inconsequentialfor the popular mood. But a considerable number feel the electorate are in a mood to the change the party in power and give the Left Democratic Front (with both Communist parties, the Janata Dal and the Indian National League) its usual due after five years. Unprecedented drought in Kerala is also working negatively against the UDF.
However, it is almost certain that PinarayiVijayan will be the chief minister in case the LDF ousts the UDF. The former chief minister and CPM Veteran V. S. Achuthanandan is though still active, is considered too old to be suitable for the post. However, the LDF has not projected any candidate for the chief ministership. In the event of UDF retaining power, Chandymay retain his post and continue to lead the Government. But almost all are certain that the difference in number of seats for the two principal contenders would be minimal, between six to eight in the 140-member Assembly. Elections will be held on May 16.

NoScope for a 3rd Party
Kerala is unique in the sense that it hardly brooks a third party between the two principal fronts who have been removing each other regularly. It is also unique in the sense that tight federations of various castes and communities rule the roost in the State and know how to extract their pound of flesh without much harm to the communal peace. Fence-jumpers are few, if any, and do not find much favour from people.

Chandy on Sticky Wicket
Chief Minister Chandy is not on a particularly strong wicket as of now. He and his UDF are being haunted by the negative fallout of the two scams. Yet, the seat sharing within the UDF was a much smooth affair and the Front came out with names and constituencies with much ease. The bargaining was tough within the LDF but it came out with the list a bit earlier than the UDF. Of the total 140 seats at stake, CPI-M is contesting on 92 seats, CPI on 27, JD(S) five, NCP four, Kerala Congress (Scaria) and Congress (S) one each.Significantly a new party, Janathipathy Kerala Congress, formed by a group of rebels in Kerala Congress (M) led by Francis George, has been given four seats while Indian National League (three), a faction of CMP (one), RSP (L) of KovoorKunjumon former MLA (one) and Kerala Congress (B) (one). However, it denied any seat to JSS, the party of communist veteran K. R.Gouri, who had broken away from the Left camp pleading for revision of the ideological stances two decades ago but came back to the fold last year.
In between the two Fronts, the BJP too is seriously into the fray, as ever but may not be able to still register its presence in the Kerala Assembly. But some observers are willing to concede a couple of seats to the party which has been hoping against hope of opening its account in the State most distant from the Centre. Old BJP warhorse, O. Rajagopal, a former Union Minister of State, is again in the fray from Nemom constituency. The nearest he came to victory was in 2014 Lok Sabha election when he was the principal loser against ShahsiTharoor mustering up 284,000 votes in Trivandrum constituency. The party has fielded cricketer Sreesanth from Trivandrum who carries some star value. His prospects are considered to be dim.
The BJP has tied up with Bharat Dharma Jana Sena (BDJS), a new party floated by the SNDP Yogam, a cultural organisation of Kerala. SNDP can cut into Ezhava community votes of the LDF. The BJP has left 37 seats for the BDJS. BJP’s brightest prospects lie in Trivandrum and Manjeswar, a seat in Kasargod district. In 2011, the Muslim League won the Manjeswar seat but BJP’s Surendran came dangerously close to victory.However, the usual pattern is that the LDF fields a weak candidate to allow the IUML win the seat in such situations. If the BJP manages to get anywhere near five seats, the chances are that Kerala may head for a hung house. This is one major imponderable in the current scenario.
For namesake, even the Welfare Party of India, floated by the JamaateIslami and Social Democratic Party of India too are in the fray and are expected to only play spoilsport to the chances of the IUML or UDF candidates.