The media conveniently buried the EVM’s tampering in favour of the BJP, under the deafening silence. 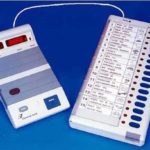 A recent expose by Rajasthan Patrika that had the potential to create a storm in the media and society has been quietly allowed to die down and buried in deafening silence by the same corporate media that has routinely been creating mountains out of molehills.
To recapitulate briefly, the Patrika website, patrika.com, recently put a video clip in which an Election Commission official (a woman) was seen test-running an EVM (electronic voting machine) as half a dozen junior officers watched standing in a semi-circle around her.
No matter which party’s button she pressed the machine stamped the BJP’s lotus invariably. It seemed the machine had fallen blindly in love with the saffron party. This trial was going on in preparation for mid-term elections in Madhya Pradesh.
The Election Commission official laughed at this behaviour of the voting machine. Then she turned to her junior officers and warned them not to tell it to the media. Otherwise, stern punitive measures would be taken against them, she declared, stifling her laughter. Quite obviously, this was a humongous scandal. But, the media ignored this menace to Indian democracy. No wonder, the media has lost much of its credibility already.
The Election Commission did not cover itself with glory when it refused to take action on the complaint of Delhi chief minister, Arvind Kejriwal, against this tampering with EVM. Instead, the EC not only ignored Kejriwal, but delivered a patronizing sermon to him. Obviously, the EC carries little weight before the executive, even though it has been fully armed by the Constitution to stand its ground against the most powerful government.
Why did the media not pick up the news that was so vitally important to the survival of democracy? Simply because it has lost the spine to stand up to the executive authority of the state. The Election Commission, too, failed to take up the challenge for the same reason.
In this background, it is important to ask why  Rajasthan Patrika chose to expose the scandal even though it has the same reason to fear the government as any other big media house. The Patrika, published from a dozen big cities of India, claims a circulation of over a million copies. Thus, it had to lose as much from confronting the BJP as any other major media group.
The reason for the Patrika’s  ostensible courage is as disappointing as the cowardice of others. It carried out the sting operation to embarrass Rajasthan CM, Vasundhra Raje Scindia, and BJP against whom it is engaged in a running battle. Scindia’s BJP government has stopped all government advertisements to the Patrika, which infuriated it and led to the sting.
In the final analysis, no big media house is driven by truth, or democratic idealism. One way or the other, all of them are busy serving their own interests at the cost of public interest. Do we still need to talk about media credibility?