Islamic Voice 0 August, 2016 12:00 am
Congratulations! Your POLITICS Is (Are) About To Stop Being Relevant
Photos
Alliance to take upon Formidable BJP

Muslims and Dalits need an alternative alliance to tap their anti-incumbency votes. An alliance between Congress and BSP can possibly do this. 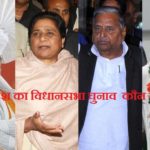 India’s most populous State, Uttar Pradesh, is heading for Assembly elections early next year. Having cornered 71 of the 80 Lok Sabha seats, the BJP would be trying its utmost to capture power in the key state. Currently, the BJP is in no position to claim any moral superiority on the strength of its performance. The two year rule of the party at the Centre has nothing to offer by way of positive achievement. Most of its promises remain unfulfilled. One could ask as to where are the sixty million (six crore) jobs. Statistics reveal that the economic growth is not yielding jobs for the unemployed. Goods and Services Tax (GST) Bill is yet to be passed. Work is yet to be initiated on Agri-Rail Network promised in the President’s speech on June 9, 2014. Far from taking the Kashmiri Pundits back to the Valley homes, the Valley is in turmoil. Skill India programme is proving to be mere hogwash with India producing more engineers than technicians. The Forest Policy unveiled by the Union Government had to be taken back as it was seen as industry-friendly.
It will be a tall order for the BJP to face the electorate with this extremely negative record. But what it cannot achieve on its own, may be possible to achieve if the Muslim and Dalit votes get splintered. It is here that the main task lies before the two vital communities. It is now time that these social groups put their act together and unify their ranks.

Communal Harassment
The BJP’s phenomenal success in the State owed itself to communal polarization which saw swing of Hindu votes towards the BJP and Muslim votes getting divided between the Samajwadi Party and the Bahujan Samaj Party and to a lesser extent the Congress. This must not happen now that the BJP is aiming at capturing the most vital Hindi state. It has been kicking up controversies and trying to whipping sentiments on beef-eating, ghar wapasi (conversion) and Love Jihad. Communal harassment fuelling exodus from Kairana and Kandhla towns in Shamli district is latest divisive ploy.
Akhilesh Yadav’s Government has though been successful in leading the State on trajectory of economic development, but his record in checking the communal riots has been less than creditable. Mayawati was in fact more successful in keeping the communal elements under check. Currently, it is not certain how much of her votebank is intact after it proved ineffective during the 2014 elections, handing the advantage to the BJP. Meanwhile, the Congress too is trying its burnish its image and re-energise its moribund cadre in the State where the party lost the power in 1989 to the regional parties and even completely lost its votebank in the aftermath of 1992 demolition of the Babri Masjid. The party has announced Sheila Dixit as its chief ministerial candidate in a campaign being directed by Prashant Kapur who was behind the phenomenal success of the Narendra Modi’s campaign in 2014.

Anti-Incumbent Votes
It is certain that the SP and BSP cannot come together in the State. The Muslim votes have mostly been going the way of these two parties for the last quarter century. For the sake of the Muslim votes, which have alternately swung between them, the two parties cannot afford to have an alliance with the BJP. But it is quite possible for either of them to ally with the Congress. But the SP being the incumbent in power, may not like to have Congress as its ally. It leaves only the BSP and the Congress as possible alliance partners. This is possible only if the Congress gives up its idea of being the dominant partner and settles for a junior partner and the BSP gives up self-aggrandized notions of itself. Only an alliance like this can ensure that the sizeable Muslim and Dalit votes would consolidate behind a front capable of giving the BJP a run for its money. This will also allow the two parties to jointly tap the anti-incumbent votes of these social grouping which will otherwise be squandered. But then the declaration of Sheila Dixit as the chief ministerial candidate puts paid the hopes of the two sides coming together for a meaningful alliance.