Bonding in Business – The Cooking Couples

em>Everybody says the kitchen and cooking is a woman’s domain, but times have changed. Muslim men and women today work as partners in many trades and food, is one of them. Islamic Voice presents profiles of two couples from Bangalore, Anjum Kalim Aziz and Huda of Fresh Kitchen Foods, and Mohammed Ismail and Farida Begum, who run a canteen in a school in the city. Their journey together in business can inspire many more to do the same.

How many of us hold on to our dreams and make them come true? It is easy to give up half way and sell our dreams for pots of money. Anjum Kalim Aziz, 44, is one of those rare few, who not only held on to his dreams, but worked hard to be true to his ambitions, even if it meant slogging 24 hours a day for over 20 years. Keeping company with him all this while had been his wife Huda Anjum who stood by him through all ups and downs and is an equal partner in their business. From Chick Cellar to Fresh Kitchen Foods, Anjum Kalim Aziz’s and Huda’s journey is a journey of understanding, respect for each other and more than anything, cooking together to give customers food, made in the most upgraded, hygienic and excellent ambience.
Anjum Kalim Aziz completed his schooling in St. Germains in Bangalore, then after a diploma, headed to Mumbai to finish a course in catering technology. (Bachelors in Hotel Management). Being a foodie right since childhood, he began experimenting with food. While his three other siblings played with dolls and kites, Anjum spent time in the kitchen rolling out chapattis to “help his mom” and eating them himself later because most of them turned out to be cut-outs resembling different states of India in various shapes! In 1987, he travelled widely to different countries including Malaysia, Far East, Middle East and Europe, to learn more from food expos and seminars. “This was the learning phase and in 1995, with my brother Mehdi, we set up the frozen food and meat business under “Chick Cellar” here in Bangalore, with just a few thousands in my pocket. The prime location of this outlet in Koramangala was a boon and business soon boomed. Meanwhile, my wife Huda and myself began making spices and masalas at the cottage level from home. We were the pioneers to start marinated chicken and then upgraded to Culinary Foods in the midst of tough competition from big brands,” says Anjum Kalim Aziz, who holds membership in RCA (Research Chefs Association USA) and is the professional member in the IFT (institute of Food Technology) USA, both being the most premier bodies in food processing, culinary science and technology.
Eastern Food Specialities Pvt Ltd was a venture which was very challenging and here, handling culinary foods, all made, with the most state-of-the-art- equipment opened the gateway to entrepreneurship for Anjum. Huda, independently handled the operations as production manager, while Anjum took care of the economic logistics. Having gained good knowledge through this venture and letting this venture go into the pages of history a few years later, Anjum’s passion for creativity led him to move further into ready- to- eat foods. In 2012, Anjum and Huda ventured into Fresh Kitchen Foods, Speciality Retail, Express Takeaway. Keeping in mind the health conscious buyer, under the vigilant eye of Huda who is the manager of Express Takeaway, the range of ready- to- eat mutton and chicken delicacies are 100 per cent non-fried. The range includes hot foods, ready to eat, which can be re-heated in the pan or microwave or stored in the freezer. Anjum, as chief consultant of Fresh Kitchen Foods (FKF) has introduced chicken and mutton biryani take-aways and it also has space for dine in, if you wish to eat there. Future plans include setting up franchises for FKF in January 2013. Anjum spent 16 years training Huda, the ropes of culinary and the operations involved, and today she is the face of Fresh Kitchen Foods which is the flagship store in Koramangala. Anjum spends time as chief consultant for M/s Culinary Consultancy offering his creative advise to multi-national food conglomerates.
“Zero tolerance has been the key to our success in this business together. No compromise on quality, hygiene and deadlines. Even a minor lapse on my part or the staff, we all will be taken to task by Anjum,” says Huda.
With his creative mind, Anjum had received many lucrative offers in the food industry which would have given him a fat pay packet, comfortable job and security for the future. “But I declined all these as I am very passionate about my freedom to be original, create, innovate and take risks. Entrepreneurship seemed to have come to me right at birth. I wanted to be my own master, work hard, and experiment, even it meant taking risks. Food is my passion, I want people to enjoy their food. That’s why I stuck by my principles and decided to follow my dreams. The journey has not been easy, but I have enjoyed every moment of it. It is all by Almighty God’s grace that I have been able to reach this level. My late mother has been a big source of inspiration to me. I tell my three daughters and a son that they should follow their dreams, but without compromising on the basic tenets of honesty and hard work”.
If you step into Anjum and Huda’s Fresh Kitchen Foods, you will surely get hygienic and healthy food. More than this, you will gain some lessons on life too about what it means to put not a pinch, but heaps of love and affection while cooking food together as a couple, as Anjum and Huda have done. Do go and spend some time with them. Their chickens will get dressed for you by then!
(Anjum and Huda can be reached at Fresh Kitchen Foods, 82, 7th Main, 4th Block, Near BDA Complex, Koramangala. Ph: 9845203249, 9880418077)

September 14, 2019
Ayesha Noor, a 21-year-old Karate champion from the slums of Kolkata, will be representing India in an upcoming internat... More
Prev Post Free ‘Bike-Ambulance’ for Poor in Jalpaiguri
Next Post Lunch Time for Kids with Farida and Ismail 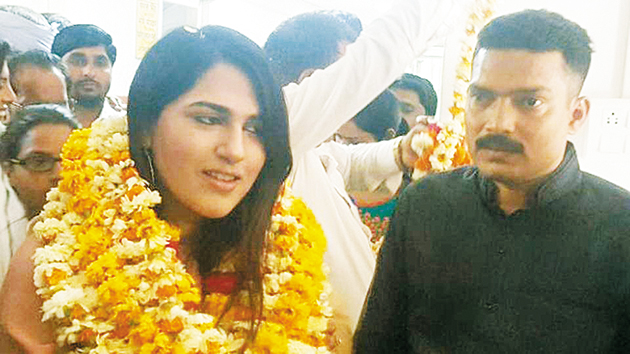