He wanted restoration of Babri Masjid, but did not allow his stance to cause a rift with the opponents who fought for the conversion of mosque into a temple. 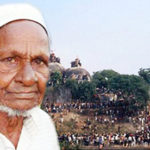 Lucknow: The key petitioner of Babri Masjid case, Hashim Ansari passed away on July 20. He was the most known face of resistance against the conversion of historic Babri Masjid into a temple as claimed by the VHP and strident voice for its restoration as a mosque. He was 95.
He had deep attachment to Babri Masjid and had prayed there till the December 22/23, 1949 night when idols were installed surreptitiously by communal forces. He was also sentenced for two-years jail for calling azan from the Babri Masjid in 1952. He maintained staunch friendship with Akshay Brahamchari, a Gandhian who too advocated restoration of Babri Masjid and Hindu-Muslim unity. Brahamchari died in 2010.
Ansari had inherited the profession of tailoring from his father and was a man of austere habits. He led a frugal life and was dedicated to the cause of restoration of Babri Masjid and spared no sacrifice for the cause.
According to Masoom Muradabadi, Editor of Urdu fortnightly Khabardar Jadeed from Delhi, a leading politician from the ruling party met him soon after the demolition of Babri Masjid (on December 6, 1992) and offered him Rs. 2 crore and a petrol pump in lieu of withdrawal of the case. But he refused to accept anything and continued his legal battle.
He headed the Ayodhya branch of BMAC as well. He attended several demonstrations and sit-ins organised for the recovery of Babri Mosque. On 30th March 1987, when a massive demonstration was organised at Boat Club, Delhi, Hashim Ansari was the centre of attraction for everyone there as well. He was given a place in line with Muslim leaders at the public meeting at Boat Club.
Moradabadi writes: “What is noteworthy here is that despite such a long nerve racking legal battle, Hashim Ansari had no bitterness and antipathy against his opponents. He used to go to the court with his opponent Paramhans Ramchandra Das in the same rickshaw. When Paramhans Ramchandra died, there were tears in Hashmi Ansari’s eyes and at Hashim Ansari’s death, tears were noticed in the eyes of the leader of Rama Temple Abhiyan Gayan Das. He laid a wreath of flowers on Hashim Ansari’s dead body and walked with the hearse along with his other Hindu neighbours, up to the graveyard.
Ansari was against politicizing the issue which led to lot of bad blood between the Hindus and Muslims and lent an issue to political parties to grab power.
Hashim Ansari also pleaded the Babri Mosque case in Allahabad High Court as well. This case is under review in the Supreme Court as the parties have challenged the bizarre decision of the High Court in which Babri Mosque site was divided into three parts, one of which was granted to Nirmohi Akhara and the other two equal parts were handed over to Sunni Waqf Board and Ram Lalla.
In 1992, the Karsevaks torched Hashim Ansari’s house. But his Hindu neighbours put it off. n
(Source: excerpted from Urdumediamonitor.com)