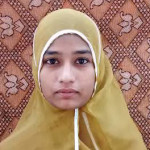 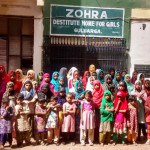 By A Staff Writer
Kalburgi (previously Gulbarga): For the first time, a girl from Zohra Destitute Home for Girls here has secured a seat in a medical college. Amreen, 18 who had been an inmate in the Home, has been offered a seat in the MRMP Medical College in this northern Karnataka city through the Common Entrance Test (CET). She scored 83 per cent marks in the Pre University exam and 4,224 ranking in the CET. Amreen had been enrolled in the Shaheen PU College, Bidar for the two-year PU course.
Amreen had been an inmate in the Home since she attained the age of six after death of her father Ismail. Secretary of the Home, Mr. Azam Ali told Islamic Voice that they decided to send her to the Shaheen PU college in Bidar going by her excellent academic record.
Zohra Home run by the Zohra Women and Children Charitable Welfare Trust was set up by a group of social workers in 1979 on the Old Jewargi Road in the then Gulbarga. It is located on half an acre plot of land and accommodates 250 girl-inmates in its 60-room facility. Uniquely managed, the entire Home is looked after by a single warden and four cooks man its kitchen.
According to Mr. Azam Ali, two girls from the Home completed the engineering degree and 12 others have completed their diplomas in engineering in the past. Both engineer girls are now employed. Besides these, two more inmates are studying B.Arch course in Malik Sandal Institute of Architecture in Vijayapura (earlier Bijapur).
Contact for more details: Azam Ali-9448041586, Off: 08472-231062, Warden Sajida-9449837869.