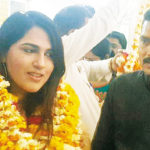 Garhazan Village (Bharatpur): The day the by-election for sarpanch of Garhazan village in Bharatpur (Rajasthan) was held, poll candidate Shahnaaz Khan was busy taking her MBBS fourth year practical examinations. A few hours after polling, the by poll results came in. Villagers had elected the 24-year-old medical student of Teerthanker Mahaveer Medical College and Research Center in Moradabad, Uttar Pradesh, as their sarpanch. Shahnaaz is the youngest sarpanch of her village, which is in Mewat region that includes parts of Haryana and Rajasthan. She gets a chance to take forward her paternal grandfather’s political legacy. “People in Mewat area don’t send their daughters to schools. I will present before them my own example to show what education can do for a woman,” Shahnaaz said after taking oath as sarpanch. She will start her internship at Civil Hospital in Gurgaon shortly and take an entrance examination for postgraduate course in medicine later, but is confident of juggling studies and grass-roots level politics.
A young and educated woman sarpanch is a change in Mewat region, which is considered among the most backward areas of Rajasthan. Mewat comprises portions of Alwar and Bharatpur districts, inhabited, among others, by Meo Muslims. Shahnaaz’s parents are also in politics. Her mother Zahida Khan is a former MLA from Kaman constituency in the district. Her father, Jalees Khan, was Kaman pradhan (head of block level panchayat body).
(Extracted from hindustantimes.com)