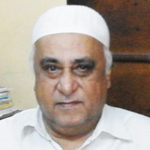 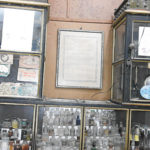 I felt a bit like Alice in Wonderland as I stepped into Baitus Shifa Unani Pharmacy. Nestled in a quiet area called the Mandi Mohalla in Mysuru, this quaint place is owned and managed by Hakim Syed Moinuddin, a 68 year-old Unani physician who embodies kindness and humility despite the fame he enjoys not just in Mysuru, but across Karnataka..
Hakim Moinuddin’s Unani Pharmacy building takes visitors back to the good old times. It is packed with antique furniture, pretty bottles in which are stocked Hakim’s medicines, a wooden staircase, a copper water samovar and giant goblets from Iran, which once upon a time were used to fetch rose water!
It was in 1921 that his father set up a “Dawa Khana” in this antique building. “My father would work at the Government Ayurvedic Hospital and also manage the Unani Pharmacy here. Apart from many needy and poor people who consulted my father for their ailments, there were also members from the Maharaja’s family in Mysuru who would consult him. He would never accept any money from the poor and needy,” says Hakim Moinuddin.
Born in Mysuru, Hakim Moinuddin has six brothers and a sister. At the age of 10 months, he suffered a polio attack. All efforts by his parents to get treatment for him failed and it seemed like he had to live life with polio. Coming to terms with this reality and encouraged by his parents to pursue his education, Hakim Moinuddin completed M.A. in History from Manasa Gangotri in Mysuru.
It was a turning point in his life when he began to be guided by his father with the Unani medicine treatments. Picking up the skills and the gentle ways of his father, Hakim Moinuddin began to meet patients, talking to them, listening to health issues and assisting his father in making Unani potions. After his father passed away, in 1979, he took over the responsibility of running the pharmacy. Today, he is assisted by his wife Azra in making the Unani medicines and continues the tradition of treating the needy and poor without charging them anything. “My medicines work well for gastric problems, kidney stones, blood pressure, and even diabetes. I am grateful to God that I am able to serve people who belong to different faiths, and that is my service to God. I never looked upon my polio as a handicap at all. Today, I want to help people in whatever way I can by healing their ailments, with God’s help of course,” says Hakim Moinuddin. Blessed with a daughter and a son, his wife Azra and he have kept up a tradition of being extremely generous hosts to their visitors. Heaping visitors with kind, healing words, the couple radiate an aura of peace as they follow a disciplined lifestyle of valuing time as taught to them by Hakim Moinuddin’s father.
“Up for fajr at 5 am, breakfast at 7.30 am, lunch at 1 pm and dinner at 7 pm was the strict discipline my father taught us, and I try to follow this today too, and also advise my children and grandkids to do the same for their mental and physical health,” says Hakim Moinuddin.
Baitus Shifa Unani Pharmacy is really a little wonderland and Hakim Moinuddin and his family are wonderful people. It’s all quite something one finds today only in fairy tales! If you ever visit Mysuru, do stop over to meet Hakim and his family. Their kindness and simplicity are healing and overwhelming!