Islamic Voice 0 November, 2013 12:00 am
Learning From Each Other in the Spiritual Search
What Little Olinj Taught Me On Teacher’s Day
Need For ‘Gaali’ Free Campaign

After 18 months of living in complete darkness, a Tunisian woman pilgrim regained her eyesight while standing on Arafat at the climax of the Haj this year. 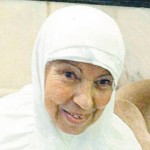 The 70-year-old Nafeesa Al-Qurmazi, mother of two boys and three girls, said she came to the Kingdom for Haj totally blind and is now going back to Tunisia with her full eyesight.
She lost her eyesight after she had a stroke about a year and a half ago. The doctors lost all hope that she would regain eyesight due to the severity of the stroke and her age. “I have never lost hope in the providence of Allah. I kept praying to Him all the time to give me back my eyesight,” she said. Qurmazi said she decided to increase her Dua (supplication) in Arafat and was sure that “Allah would not disappoint me. While doing the Dua in Arafat I suddenly started to see. When the other pilgrims in my tent saw me crying with joy, they all started chanting, ” Allahu Akbar,” she said.
Qurmazi said that all the way from Tunisia she had been cherishing one dream: To see the holy sites, Makkah and Madinah. “Thank God, now I can see and walk anywhere without any assistance from anyone,” she said.
She said she was overjoyed to see the pilgrims in Arafat, a scene she never expected to be true to her. “Allah has blessed me with my eyesight in the most sacred place on earth,” she said.
(Reported by Khaled Saleem Al-Humaidi, Saudi Gazette)