MERS Virus and What it brings to One’s Mind

A tiny virus invisible to the naked eye is able to baffle 21st-century science and technology, causing the death of thousands of people. But what is it, apart from the will of God, that makes a virus impossible to beat? 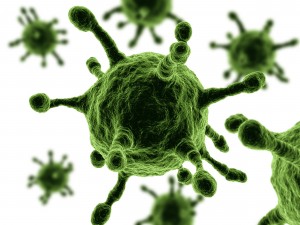 We have frequently heard of viral epidemics in recent years. Many people are familiar with the names of these viruses, such as HIV, Ebola, Nile Virus, H1N1 (swine flu), SARS and now Middle East Respiratory Syndrome, known as MERS.
MERS has a relatively high mortality level; thirty-five percent of reported cases have ended in death. According to the World Health Organization, 254 cases have to date been identified in various countries. Fifty new cases were reported last month, and the Saudi death toll has crossed 100. In addition to Saudi Arabia, MERS cases have been seen in Jordan, Kuwait, Oman, Qatar, the UAE, Germany, Great Britain, France, Greece, Italy, Tunisia, Malaysia and the Philippines.
It is not yet known how the MERS virus infects humans. People carrying the virus can transmit the disease without being aware of it, or the disease may quickly end in pneumonia, organ failure and death. Research has thus far provided no answers, meaning there are no drugs or vaccinations against this virus at the moment.
A tiny entity invisible to the naked eye is able to baffle 21st-century science and technology. A tiny virus may cause the death of thousands of people, as has been seen before in history. But what is it, apart from the will of God, that makes a virus impossible to beat?
The answer to this is an important sign leading to faith. God has created diseases in order to show the transitory nature of this world and to show people how weak they are, and has created and equipped viruses, which cause some of these diseases, with an amazing system.
The war between our cells and viruses is vitally important for human life. Viruses can be very active in the body and they literally invade cells; they then use the machinery and metabolism of the host cells for their replication and thus turn the cell into a factory producing more copies of themselves.
In order to accomplish its task, the virus needs enormous information, awareness and also power. It is obvious that a virus so small that it can only be seen under an electron microscope is itself unaware of this immaculate structure. So how did that structure come about? Even though the virus has no brain or eyes, how does it know when and how to act?
There is no doubt that it is Almighty God who creates the virus, and the host cell and its machinery. With these complex entities He creates, God shows us His matchless artistry and infinite might. The virus is one of the most interesting structures in nature. It does not possess a cellular structure and consists solely of a genetic mechanism. It consists of a protein coat and genetic material (DNA or RNA) inside that coat. By itself, it has no functions or organelles exhibiting signs of life. However, when it enters an organism it comes to life and becomes active. From the moment it interacts with a living cell, it starts to exhibit life properties; it becomes an aggressive and also highly intelligent creature.
Before entering a cell, the virus works out which cell is suitable for it. If the test result is positive, it injects its own genetic material into the cell and begins replicating, using the host cell’s DNA and RNA synthesizing machinery, and RNA processing machinery.
It is indeed very hard for the cell to become aware of the situation: It is like finding a short sentence from an encyclopedia consisting of 20 volumes. By means of this “intelligent” method, the virus mixes with the host cell’s own programming mechanisms and literally becomes a part of the cell.
Under normal circumstances, a cell never reads the code for any protein, not even of proteins of other cells, apart from those it needs whose codes are marked in DNA with special locks. However, the cell reads the virus DNA and continues producing the virus. How the virus does this is still a mystery for scientists.
This spells disaster for the cell. A dying cell is used right to the end of its energy for production according to the program wrongly encoded in its nucleus. Then it dies and is broken down. As it breaks down, the accumulated viruses enter other cells and find new targets for themselves.
This viral invasion would proceed fast enough to kill a normal person in a few days were it not for the immune system; that defense mechanism identifies the virus soon after it enters the body and immediately initiates a counter-offensive. This enables us to survive instead of being killed by the simplest virus.
God shows us our weakness through a tiny entity
In order to behave so successfully, the virus has to fit the cell in the same way a key fits a lock. We are looking at a most evident truth here; God has created viruses deliberately to cause disease. By means of troubles of this kind, human beings are better able to realize their helplessness and the infinite might of God.