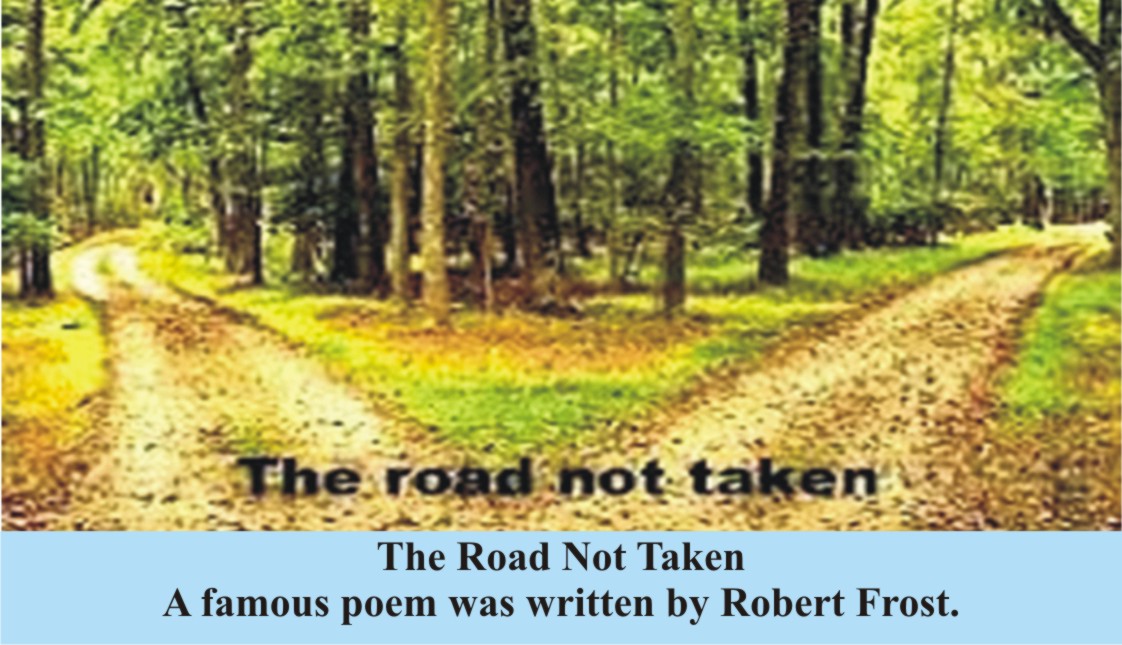 The Road Not Taken

In our lives we are faced with choices. And from moment to moment we have to make a choice, a decision of which road we want to travel.

The Road Not Taken
A famous poem was written by Robert Frost.
*Two roads diverged
in a yellow wood,
And sorry I could not travel both
And be one traveler, long I stood
And looked down one
as far as I could
To where it bent in the undergrowth;
Then took the other,
as just as fair,
And having perhaps
the better claim,
Because it was grassy
and wanted wear;
Though as for that,
the passing there
Had worn them really
about the same,
And both that morning
equally lay
In leaves no step had
trodden black.
Oh, I kept the first for
another day!
Yet knowing how way leads
on to way,
I doubted if I should
ever come back.
I shall be telling this with a sigh
Somewhere ages and ages hence:
Two roads diverged
in a wood, and I –
I took the one less traveled by,
And that has made all the difference.*

In this Poem, the roads represent the decisions we make and the choices we have in life and undergrowth represents the uncertainties in life.

The Poet is standing at the crossroads and is trying to see further ahead into the future but is unable to as he has to be cautious in his choice.

After he tries to analyze the roads, they seem similar to him and the poet yet remains in a state of confusion.

Here, The poet realizes that there is no change in the situation and confusion still remains as it was earlier.

Naturally, these complexities of life confuse a person. Most people choose the least risky and off-trodden ways of life. They fear taking any chance.

But the Poet dares to take the road which was less traveled and later, he realizes he may never be able to return to the road not taken but continues to walk on boldly ready to face the risks and challenges in life.

The poet hopes to talk about this decision years later and he may be sad or happy or whatever but this would definitely make a difference in his life.

In recent times, we see individuals taking on the paths almost everyone is walking onor more say, most of us have become sheep of the herd. The sheep blindly follow the path on which they see others moving on without consciously pausing and seeing if this path would lead to their benefit or their destruction.

It’s apparent that not many people (like the poet) dare to walk on the path that would actually create life in this world and also the hereafter.Hence, walking on the road of destruction has become easier in our time but it isn’t impossible to walk on the road not taken.

Now If we go back to the poem, in the second stanza we get an idea that the poet had started to walk on the path more traveled but as he is walking, regrets his decision.

Hence, he strongly feels he would take the other road to know what was in there as he already knew what was on the road he had taken. It symbolizes that in life we rethink our choices, but it is not easy to reverse back the time. For he understood that in the journey of life, we may come across many roads, take the ones we will regret later on, and try to make fresh decisions. But though it is not feasible ALL THE TIME to do the same, The Poet takes the risk to start his journey on the Road not taken.

Now, you and I have a choice.
Which road do we take?
And which is the road not taken?
Whichever it might be, it shall definitely have an impact on our life.

(The writer can be reached at [email protected])