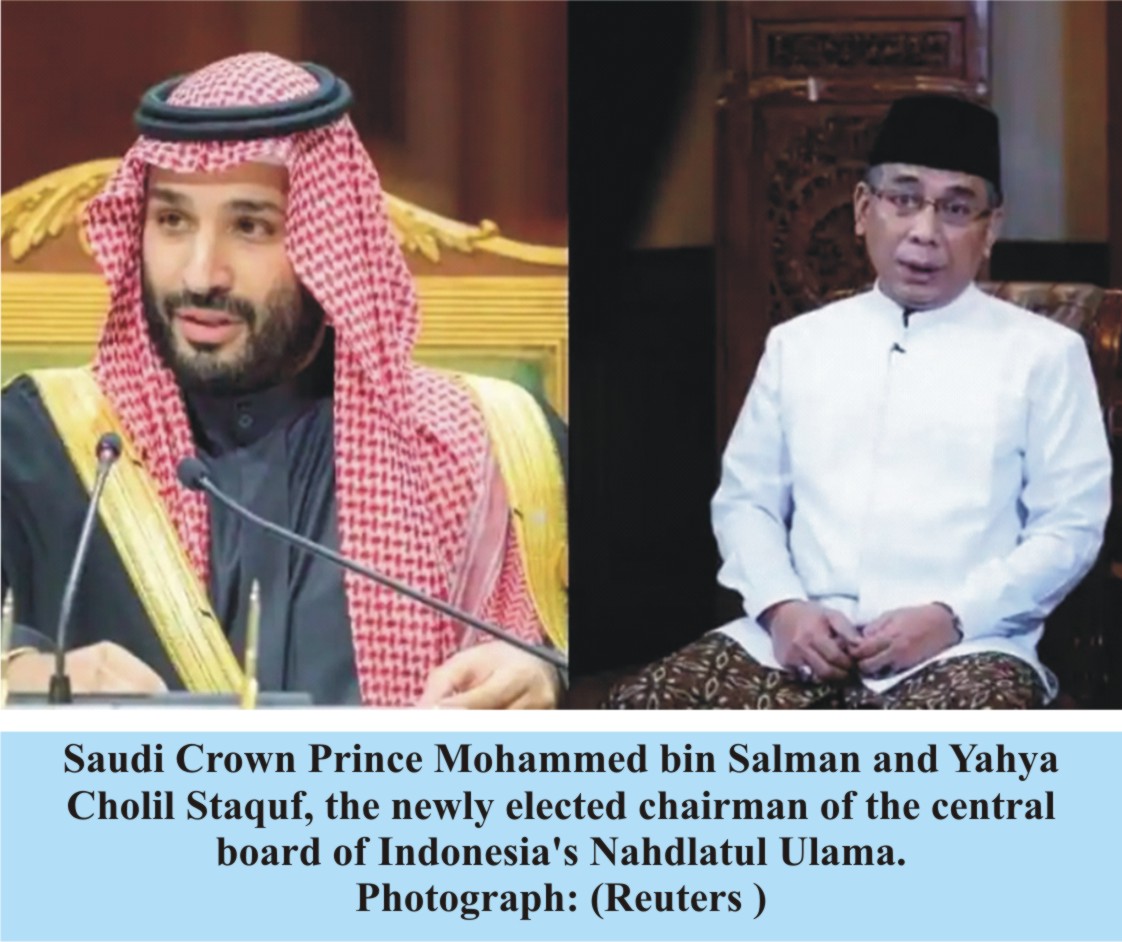 Two diametrically opposed visions of moderate Islam have emerged as major Muslim powers battle to define the soul of their faith in the 21st century in a struggle that is as much about geopolitics as it is about autocratic survival and visualizations of a future civilization and world order.

While the timing of the interviews was coincidental, they neatly laid out the parameters of a rivalry among major Middle Eastern and Asian Muslim-majority powers to dominate the discourse of Islam’s place as the world transits into an as yet undefined new world order.

Unsurprisingly, the visions expressed by the two leaders mirror the struggle epitomised by the Russian invasion of Ukraine between an autocratic, civilisationalist, and a more democratic and pluralistic vision of the world in the 21st century.

At the heart of the differences between Messrs. Bin Salman and Staquf lie questions about whether Islam needs reform or a return to basics, who has the authority to interpret or reinterpret the faith, and what constitutes proper Islamic governance.

Speaking to The Atlantic, Mr. Bin Salman left no doubt that the authority to interpret Islam was his and his alone.

A law graduate from King Saud University who prides himself as a student of Islamic jurisprudence who bent Saud Arabia’s religious establishment to his will, Mr. Bin Salman laid out the principle of the autocrats’ notion of moderate Islam: absolute obedience to the ruler.

“In Islamic law, the head of the Islamic establishment is wali al-amr, the ruler,” Mr. Bin Salman said.

For good order, Mr. Bin Salman added that “Saudi Arabia is based on pure monarchy,” and he, as crown prince, would preserve the system. To remove himself from it would amount to a betrayal of all the monarchies and Saudis beneath him. “I can’t stage a coup d’état against 14 million citizens,” Mr. Bin Salman said. He was asserting that most Saudis supported not only the monarchy but also one-person monarchical rule.

Mr. Bin Salman was also insisting that he decided what implementation of Islamic law entailed and that he had the authority and power to interpret the faith as he saw fit.

In line with accepted dogma, Mr. Bin Salman said he could not change rules enshrined in the Qur’an, viewed as God’s word, but was free to reinterpret the majority of Islamic legal provisions derived from reported sayings and deeds of the Prophet Muhammad.

“He’s short-circuiting the tradition,” Middle East scholar Bernard Haykel told The Atlantic. “But he’s doing it in an Islamic way. He’s saying that there are very few things that are fixed beyond dispute in Islam. That leaves him to determine what is in the interest of the Muslim community. If that means opening movie theatres, allowing tourists, or women on the beaches on the Red Sea, then so be it.”

Mr. Bin Salman has no doubt given tradition short shrift. He has introduced social rather than religious changes of traditions that were tribal, not religious in origin, even if they were religiously packaged.

“Mr. Bin Salman may have more drama to show in his efforts to define ‘Moderate Islam’ and control its narrative than Mr. Staquf’s opening salvos of what amounts to a battle for the soul of Islam.”

The crown prince’s views clashed with an opposed vision of what Indonesia’s Nahdlatul Ulama calls the need to “recontextualise” Islam to bring its legal concepts and philosophy into line with the 21st century.

Recontextualisation would involve revising “obsolete” elements of Islamic jurisprudence that are supremacist or discriminatory. These include concepts such as the kafir or infidel and dhimmi or people of the book like Jews and Christians who enjoy protected but second-class status under Islamic law; and slavery which has been abolished across the Muslim world in secular law but has yet to be removed from the Sharia.

The clash of visions was evident in Mr. Bin Salman’s definition of authority and his rejection of the notion of a ‘moderate Islam.’ Mr. Bin Salman insisted “that the term would make terrorists and extremists happy.”

In the crown prince’s mind, it suggests that “we in Saudi Arabia and other Muslim countries are changing Islam into something new, which is not true,” he said. “We are going back to the core, back to pure Islam,” as practiced by the Prophet Muhammad and his four successors. “These teachings of the Prophet and the four caliphs—they were amazing. They were perfect.”

Mr. Bin Salman’s insistence that 7th century Islam was perfect explains why he has not anchored his wide-ranging social reforms that have lifted major but not all restrictions on women and modern-day entertainment in religious rather than only secular law.

Yet, it is religious, not Saudi law, that pious Muslims beyond the realm of Saudi jurisdiction will look at.

It’s a void that Nahdlatul Ulama hopes to fill. The group says it has started to do so when in 2019, a gathering of 20,000 Islamic scholars declared the legal category of the kafir or the infidel to be obsolete and no longer operable under Muslim law.

The term was replaced with the word muwathinun or citizen to emphasise that Muslims and non-Muslims were equal before the law. “The word ‘kafir’ hurts some non-Muslims and is perceived to be theologically violent,” Nahdlatul Ulama cleric Abdul Moqsith Ghazali said at the time.

The movement has since yet to tackle other legal concepts that it has identified as “obsolete.”

Nonetheless, Mr. Staquf, who was elected chairman in December noted that Nahdlatul Ulama’s founder, Haji Hasyim Asy’ari, had conceived the movement as a vehicle for “consolidating the universe.”

At the time, that meant a vehicle to fill the void created by the abolition of the caliphate by Mustafa Kemal Ataturk, the general-turned-statemen who carved modern Turkey out of the ruins of the Ottoman empire.

For many Muslims, the caliphate underpinned Islamic civilization. “From the existing records, Nahdlatul Ulama was established to forge a new path for future civilisation, to replace the old civilisational construct that was lost,” Mr. Staquf told Indonesia’s Kompas magazine.

Rooted in the history of Indonesian Islam and Nahdlatul Ulama, Mr. Staquf branded the group’s religious precepts as ‘humanitarian Islam.’ The group projects it as an alternative to state-backed, less developed, less tolerant, and less pluralistic notions of moderate Islam as propagated by Saudi Arabia and the United Arab Emirates as well expressions of political Islam represented by Turkey, Iran, and the Muslim Brotherhood.

Mr. Staquf has one advantage few other Muslim religious reformers have. Indonesia and Nahdlatul Ulama have their own religious authorities that they believe rival those of the Middle East. As a result, Nahdlatul Ulama scholars feel no need to take their cue from seats of Islamic learning like Al Azhar in Cairo or the Islamic University of Medina.

Unlike Mr. Bin Salman, Mr. Staquf sees his role as returning to the vision of Abdurrahman Wahid, a widely respected and visionary former leader of Nahdlatul Ulama and onetime Indonesian president.

Affectionately known as Gus Dur, Mr. Wahid sought to forge “a new path towards the development of a new civilization,” said Mr. Staquf, a prominent Islamic scholar in his own right and disciple of Mr. Wahid. “We must strive to establish a universal consensus that respects the equal rights and dignity of every human being.”

Mr. Bin Salman may have more drama to show in his efforts to define ‘moderate Islam’ and control its narrative than does Mr. Staquf in the opening salvos of what amounts to a battle for the soul of Islam.

However, in the ultimate analysis, it may be Mr. Staquf as part of a broader endeavour that has a more significant impact on the reform of Islam rather than the reform of only one Muslim-majority state.

The writer-James M Dorsey is an award-winning journalist and commentator on foreign affairs who has covered ethnic and religious conflict and terrorism across the globe for more than three decades.