Islamic Voice 0 November, 2015 12:00 am
Bembala Foundation: Helping One Survivor of Abuse at a Time
Humanity Above All – Sikh Charity Helping Syrian Refugees
Bouquets and Blood Donation

Health Campaign by Indian Muslim Relief and Charities (IMRC)
Nabila Begum and Ghulam Dastagir are trained paramedics, deeply concerned with improving the health of the poor suburbs of Hafiz Baba Nagar in the City of Nizams. 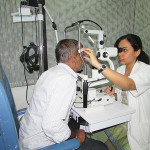 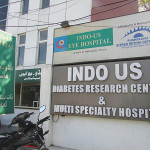 Hyderabad: Nabila Begum and Ghulam Dastagir, from the Indo-US Eye Hospital – run by the US based Indian Muslim Relief and Charities (IMRC), in collaboration with their sister organization, Sahayta Trust, are trained paramedics deeply concerned with improving the health of the poor suburbs of Hafiz Baba Nagar in the City of the Nizams.
They are part of the team for the Hospital Based Community Eye Health Project whose goal is to improve eye health and conduct screenings for cataract, diabetes, and other health ailments. Here in Hafiz Baba Nagar, with a population of 1,45 ,000 people, 90% of the people live below the poverty line. Many have never been to a doctor and are unaware of the government health services they are eligible for.
US based President of IMRC, Maqsood Quadri says, “Poor people tend to have the least awareness of the ailments they might be suffering from and often they visit doctors only when it becomes very severe. With this community health project, we are trying to reach out to the poor and needy so that the disease, if any, is detected at the early stage itself.”
A team of 20 trained paramedics and volunteers, along with Nabila and Dastagir, have been going from door to door for over a year conducting surveys and collecting data on the current health condition of the community. They provide basic health education primarily on eye health, but also cover diabetes, chronic disease, maternal and child health, and immunizations. Their message is one of prevention and health awareness. The study also hopes to increase patient walk-in admission to the hospital by 20% annually and so the team makes appropriate referrals when needed and explains government programs both adults and children can apply for.
Explaining the aim of the project, Telkar S. Baba, Project Manager of the ‘Hospital Based Community Eye Health Project,’ informs, “With an aim to make Hafiz Baba Nagar cataract free, our volunteers have already screened over 38,000 locals in the first phase, and in the second phase, from June, we are now following up with over 1000 patients detected with cataracts or other eye diseases.” In the last year, 465 cataract surgeries were performed at the hospital.
Due to financial hardships, many of the patients are unable to pay the expenses even at highly subsidised hospitals run by IMRC. The files of such cases are forwarded to IMRC and on a case to case basis, very needy patients are helped to further lessen the burden of medical expenses.
Health Clinic in Hafiz Baba Nagar
Hyderabad based Syed Aneesuddin, CEO of the Sahayata Trust, says that they are focusing on eyes for now, but with the annual health camps, they attempt to cover all other diseases as well. In the near future, he says he hopes to start a health clinic in Hafiz Baba Nagar so that local residents can have quality medical care at an affordable price.
In 2014 alone, the Indo-US hospital treated over 8,000 patients. They screened over 19,000 people for eye diseases and performed 2,500 dialysis sessions.
The Indian Muslim Relief and Charities (IMRC) is a US based non-profit organization which began in 1981 and helps run several programmes throughout the country, in partnership with over 100 organizations. It focuses on providing education, emergency relief, medical and legal aid, shelter and food for the needy. IMRC has been at the forefront of providing immediate relief to affected victims of the 2015 Nepal earthquake, 2014 Kashmir Floods, 2013 Muzaffarnagar riots, 2012 Assam riots, and other natural/man-made calamities. n
(Twocircles.net)