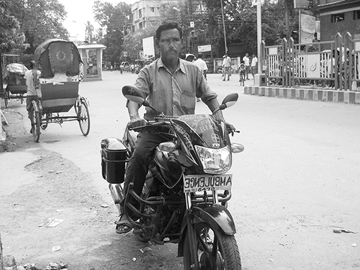 Jalpaiguri/Kolkata: All of us are familiar with four wheeler ambulance. But a motor bike serving as an ambulance is quite unusual. However, a tea garden worker in Jalpaiguri district in West Bengal uses his motorbike to take poor villagers to hospitals and clinics free of cost. Karimul Haque from the Dhalabari village under the Malbazar police station in the district has become popular in his village and neighbourhood, for his unique concept of ‘bike ambulance.’
The service and mobile number of ‘Karimul Bike Ambulance,’ has become popular and is known to most people, from local doctors to police and other block officials. What’s more, his service is available day and night. There is a Primary Health Centre at Kranti, about six kilometers from the village, but it has no arrangements for operation or critical disease treatment. There is another hospital in Malbazar town in the district across river, but there is no over bridge from the Dhalabari village, where most people work as tea gardeners. So Karimul has to drive 45 kilometers in one stretch. Two Circles Net spoke to Karimul, who lost his mother, Zafuran Nessa because of non- availability of basic health infrastructure. Karimul said, “My mother died due to lack of treatment and so I decided to start this bike-ambulance service for poor. By the grace of Allah, I am bearing the fuel cost and giving the ambulance service to the village.”
Karimul works in a tea estate and earns Rs 4000 each month. He keeps 25% of his salary aside for fuel cost, etc. for ‘bike-ambulance,’ while another 25% goes to the bank for paying monthly installments of the bike. He says he is doing this in memory of his mother so that God grant her a place in heaven. He has two sons and two daughters. Both the daughters are married and his two sons are working as mobile mechanics. Even his family members are supportive in his work. Karimul’s wife Anjuara Begum said, “We are all the members of the family and support him in his service.”
But why not instead buy a car? Both Karimul and his wife say, “We are poor and do not have sufficient funds. Moreover, the bike ambulance has become famous in the district and suits for the difficult terrain in the region”.
Karimul Haque may be reached at: (Bike-Ambulance), Village : Dhalabari, Post: Rajadanga, P.S: Malbazar, Dist: Jalpaiguri, Ph: 9832571833
(Two Circles Net)