How a Gaza Christian became a Blind Muslim’s Eyes

In the early morning, Tarzi accompanies Khreis to the market to help him buy what he needs. Once the shopping is done, Tarzi goes to his friend’s house, and the two sit together to read the headlines. 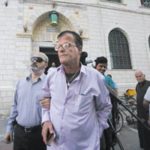 Gaza City: Kamal Tarzi, 55, is a Christian from Gaza, and he has stuck by his Muslim friend, also from Gaza, 45-year-old pharmacist, Hatem Khreis since Khreis lost his sight preparing a prescription five years ago. Tarzi says he is Khreis’ best friend and eyes. “Hatem and I have been friends for 15 years, and we have been through joy and pain,” Tarzi says. “I always accompany him, and people are shocked when they learn that I am Christian and that he is Muslim, given the depth of our relationship.” “Growing up, Hatem would always perform prayers at the mosque,” he says, “but after the incident five years ago, he was no longer able to do so because there was no one available to guide him there. I saw how he would shed tears whenever the call to prayer would come from the mosque. That is why I decided to take him to the mosque to pray as he did in the past.

Found Something He Had Lost
“The first day I helped him get to the mosque, four years ago, he was so happy. So I told him I would be taking him every day to perform all the prayers. He was thrilled to hear my decision. It was as if he had found something he had lost for a long time,” Tarzi continues.
In the early morning, Tarzi accompanies Khreis to the market to help him buy what he needs. Once the shopping is done, Tarzi goes to his friend’s house, and the two sit together to read the headlines. Tarzi says that if experts said some sort of transplant would be successful and allow his friend to regain his sight, he would gladly sacrifice one of his eyes so his friend could see his five children again.
“When I lost my sight, I was not able to do anything,” Khreis told Al-Monitor. “I couldn’t even make it to the mosque where I usually pray. I stopped seeing my friends because of their preoccupation with other things. My life changed a lot.
“At first, I was upset and sad since I would not be able to do what I used to do in the past, but after my Christian friend Abu Elias volunteered to help me go to the mosque and started spending most of his time with me, I felt better because the void I was struggling with, got filled.”
Khreis prefers Tarzi’s company over his other friends and relatives because he feels comfortable with him. Khreis is, nonetheless, sometimes obliged to turn to someone else when Tarzi is sick or busy.

Rejoicing for Each Other
Khreis said that what Tarzi is doing shows how Palestinians do not differentiate between Muslims and Christians, who share almost the same customs, traditions and everyday life. Tarzi agreed, saying, “Nothing distinguishes Christians from Muslims in Gaza. Christians and Muslims in Gaza face the same reality. In such difficult times, Christians cannot escape the situation experienced by other Gazans, especially as economic conditions are affecting both Christians and Muslims. Christians in Gaza protect Muslims just like Muslims protect Christians. They are both united. They support each other and rejoice for each other. They suffer from the same occupation and the same blockade.”
Tarzi stressed that like every other Palestinian who loves Palestine, he does not distinguish between himself and his Muslim brothers and friends because he grew up with them under the same circumstances. He asserted that Christians in Gaza are respected, appreciated and treated well by everyone. They freely perform their religious rites and rituals and enjoy the legal protection to do so.
Out of the 2 million people living in Gaza, there are some 3,500 Christians. There are three churches, which were all damaged by the Israeli bombing during the 2014 war, but eventually restored. They are an integral part of Palestinian society’s fabric and structure.