Islamic Voice 0 April, 2015 12:00 am
Empowering the Differently-Abled
A Heart-Warming Gesture
Importance of NGO’S for Socio-Economic Development

The annual conclave has emerged as an unique opportunity for exchanging experiences. 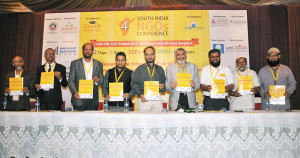 Bengaluru: The Fourth South India Social Workers Conference held here on March 14 and 15 brought representatives of around 315 NGOs working in diverse fields, principally in the field of education, social welfare and health. The Conference was jointly hosted by the Cigma Foundation and the Lead Trust, Bengaluru.
We highlight the work as shown by the PPTs by some of the prominent NGOs and important observations made by some participants.

Role of AK Academy at Makkah Masjid, Chennai
Maulana Shamsudeen Salih Qasimi, the imam of the Makkah Masjid on Chennai’s main thoroughfare Anna Salai, started the campaign to persuade the Muslim youth to participate in competitive exams as the community was not able to even claim the 3.5 % quota reserved for it in the civil services in Tamil Nadu and not a single IAS or IPS officer has been selected from among Muslims in the State. He set up a hostel and coaching centre called Azhagiya Kadan IAS Academy in 2012 on the upper floor of the mosque related building under the aegis of Islamic Literacy Movement of India (ILMI). He toured the state and held nearly 100 meetings to motivate the Muslim youth. A total of 28 students were accommodated in the hostel. Last year, Mohammed Ashraf from the academy was able to crack the IAS. Again in December last year, 22 students from the Academy cleared the TNPSC exam. Currently, 50 students, 13 of them girls, are being coached in the Academy. Contact: http://akias.in Ph: 96000-06246

Muslim Industrialists Association, Bengaluru
In 2006, several Muslim industrialists came together to form Muslim Industrialists Association (MIA). Since then, they have been conducting seminars and workshops for entrepreneurs and exchanging information among themselves about increasing productivity, reduction of waste, time management and human resources management. Currently they have 170 active members who run industries that manufacture electrical panels, incandescent lamps, aeronautic components, hydraulic cylinders, lubricants, plywood etc. They have adopted several Urdu medium schools for improvement of infrastructure and coaching and also disburse scholarships to the tune of Rs. 15 lakh. Mr. A. S. Khan is President of the Association (Ph: 97400-81456) and Meer Abdul Hafeez is secretary of the Association.

Bearys Group of Institutions, Mangaluru
Bearys Group has emerged as a builder and developer of innovative buildings in Bengaluru and Mangaluru. It was started by Mr. Syed Mohammad Beary who does not feel shy of telling that he was a school dropout. For the last few years, the Group expanded its activity to modern education and has set up several institutions which included Montessori schools, pre-primary schools, a couple of teachers training colleges, a first grade college, a computer training centre and Beary’s Institute of Technology. Around 2,700 students are studying in these institutions. View the profile: www.bearysgroup.com/education.asp

Shaheen Group, Bidar
Shaheen Group started in 1989 in Bidar, the northernmost district of Karnataka, capital of the Bahamani kingdom. It was set up by Abdul Qadeer, an engineer. Shaheen has earned a name for itself through intensive and quality coaching. Its students top the list in the Bidar district. Hundreds of its boys and girls have entered engineering and medical colleges in the State. It has currently 8,000 students from 14 states on its rolls. It recently started PU colleges in Hyderabad and Bengaluru. www.shaheenpucollege.com, Ph: 93438-34681

Salvaging from Debt: TLF Programme
Imagine who pays the highest rate of interest? You are wrong if you thought it is either industrialists, house-buyers or car-purchasers. It is the poorest or the poor people who mostly borrow for consumption purposes. They cough up as much as 150 to 255% extra on the principal to the moneylenders.
Though it may not be unique to slums in Bengaluru, a group of young professionals from the city were galvanized into action to salvage the poor from the clutches of fleecing gangs of moneylenders. Thus was born The Lifeline Foundation (TLF) in 2007. Aim was to provide small loans, for banks cannot be accessed by the poor who have no wherewithal to withstand the cumbersome procedure. Eight years hence, the TLF has 15 branches across the city with nearly 2,000 beneficiaries. It follows the Grameen model. The turnover during the last year has exceeded Rs. 1.25 crore. This has only made the TLF aware of the dire circumstances of the loan-seekers and has enabled it to help the really needy with scholarships, tuitions, medical assistance and zakat money, and in extreme cases even food and clothing. Having become acutely aware of the foundational economics of this section, the TLF also imparts them lessons in ’12 Decisions for a Happy Life’ apart from life skills rooted in Islam. (Contact Ali Shariff for details email: [email protected])

Siasat Promotes Muslim Empowerment
The Urdu Daily Siasat has been promoting the cause of Muslim empowerment in Hyderabad. Its proactive role has resulted in 935 Muslim youth being recruited in the State police. The computer centres and scholarships offered by it have enabled nearly 17,000 boys and girls, dozens of them from among even non-Muslims landing up jobs in the Infotech Industry of Cyberabad and Hyderabad.

Zafar Mahmood
Dr. Syed Zafar Mahmood, former IRS Officer and President, Zakat Foundation of India made a 45-minute presentation on coaching for Civil Services and the Role of NGOs. He presented several facts of Muslim representation in Politics and Government Jobs and the huge disparity in the population of Muslims and their percentage in Civil Services. He called upon the NGOs to prepare the youngsters of the community for the UPSC exams. He exhorted the youth to opt for competitive exams and wanted the NGOs to prepare the students from 9th grade onwards.

Rectifying the Imbalance
Senior journalist M. A. Siraj said the Muslims need to rectify the imbalanced professional profile of the community and direct youth to careers in journalism, chartered accountancy, law, social and political scientists and positions of Economists. He said most Muslim children only aspired to be doctors and engineers which led to dearth of professionals in other fields. He said knowledge was superpower in the current world, not the wealth. “Arabs had money but not dignity, because they do not have knowledge. Jews had knowledge and they rule the minds of the people, through media, research and lobbying.” He added.