A new statistical study has revealed that 1,224 crises and natural disasters hit the 57 member states of the OIC and other Muslim minorities last year, a figure that is unprecedented in modern history. 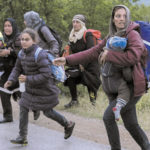 Jeddah: The number of victims of crises and disasters in the Muslim world during 2015 accounted for 73,570 people, including 69,739 as a result of crises and wars, and 3,831 due to natural disasters, a new statistical study has revealed.
According to the study prepared by the Islamic Cooperation Humanitarian Affairs Department of the Organization of Islamic Cooperation (ICHAD-OIC), 1,224 crises and natural disasters hit the 57 member states of the OIC and other Muslim minorities last year, a figure that is unprecedented in modern history.
Statistics showed a significant rise in the number of internally displaced persons (IDPs) and refugees in 2015, reaching 28,836,710 people, compared to 17,073,686 in 2014, an increase of 40.7 percent (11,763,024). The statistics suggested that 39 percent of the IDPs and refugees over the past year were Syrians.
The study revealed that the number of people affected by disasters or crises in the Muslim world reached 75,410,705, with Yemen’s share mounting to 22,307,182 people, followed by Syria 13,500,000 and Iraq 10,100,875.
The study also indicated that Syria was one of the countries that suffered the most of human causalities resulting from crises with 22,442 deaths, followed by Iraq 22,370, Nigeria 8290 and Yemen 6,000. Yemen suffered the most human casualties resulting from disasters with 726 deaths, followed by Pakistan 460, while Niger suffered the most human casualties due to epidemic diseases with 1,038 deaths, according to the new statistics.
The OIC seeks, within its Ten-Year Program of Action for 2015-2025 adopted by the 13th Islamic Summit Conference held in the Turkish city of Istanbul, to enhance joint Islamic humanitarian work and develop appropriate disaster-response mechanisms, as well as strengthening cooperation and coordination with partners at the regional and international levels, especially the UN agencies, on refugees and displaced persons in the member states.