People are showing their appreciation for Jake’s brave act of helping Noor. 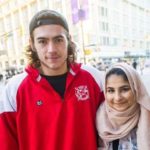 Jake Taylor, a resident of Vancouver, is being hailed a hero after he saved an 18-year-old Muslim girl from assault. Noor Fadel, 18, boarded the train at Waterfront Station. A man began to verbally assault her, yelling and screaming a litany of profanities. He allegedly said he would “kill all Muslims”. Also, Noor was wearing a hijab while the incident took place and the attacker tried to remove it with force. While no one else decided to step in, Jake did courageously. “I went over and gave him a shove, “ Taylor told CTV News. Muhammad Lila, a media correspondent, started the hashtag #ThankYouJake. Across social media, people are showing their appreciation for Jake’s brave act of helping Noor. n