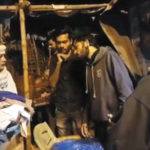 Muzaffarpur: Mohammed Imtiyaz resident of Chandwara, a post graduate from Jawaharlal Nehru University, had decided to celebrate his first marriage anniversary, on November 18, 2017, with a difference. So he launched a campaign named ‘Unnoticed ka cloth campaign’. He kept cartons in mosques and temples and appealed to charitable persons to donate warm clothes for the needy. He received an overwhelming response from kind-hearted people and a large number of warm and daily wear clothes were collected. Imtiyaz then distributed the clothes among the poor, needy, widows, orphans and destitute people living on roads, footpaths and shelter houses.
Imtiyaz said that that he and his wife, Nikhat Ahmed, wanted to make their marriage anniversary a memorable one. There came an idea of ‘Unnoticed ka cloth campaign’. Imtiyaz had also helped flood victims with a similar campaign. Besides this, Imtiyaz is also running a campaign against dowry. He himself had performed a simple marriage.