Islamic Voice 0 March, 2018 12:00 am
Fatima’s Fearless Fight To Live
Bembala Foundation: Helping One Survivor of Abuse at a Time
For a Better World: From ‘Me’ to ‘We’

Arwa Imtiyaz Bhat is not a coach or player, but performs a more important role for deaf and mute sportspersons in Srinagar 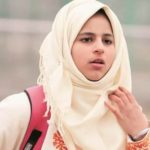 Srinagar: It’s a white winter morning in Srinagar, and a 16-year-old girl has set out from her cramped home on the city’s outskirts to help a group of badminton players prepare for a tournament at the indoor stadium. Arwa Imtiyaz Bhat is not a coach, or a player. But this Class X student performs a more important role. She translates the sound of silence. The players are among the around 250 sportspersons registered with the JandK Sports Association for the Deaf, and Arwa, who is well versed in sign language, is their voice, their mentor. Often giving up classes at school, she has accompanied JandK teams to tournaments across the country, from Delhi to Chennai, fielding calls from worried families, helping liaise with organisers and officials. She says the reward is not money “ she’s not paid any “ but moments such as those last December when the JandK team won four gold, three silver and two bronze medals in the National Games for the Deaf in Ranchi.
“My mother Rehana can’t speak or hear. Her brother Mohammad Saleem, a good badminton player, is also deaf and mute. And ever since I can remember, I have seen them struggle, facing discrimination outside and within our family. I could not stand that, and decided to do whatever I could to help anyone in that situation. I learned how to communicate in sign language from my uncle who had undergone training in Delhi,” says Arwa.
It hasn’t been easy, she admits, especially convincing parents of deaf and mute children to let go. According to Waheed ur Rehman Parra, secretary, JandK Sports Council, Arwa is an inspiration. “I am surprised by the dedication of this girl. And I try my best to help out and speed up paperwork of any team with which this girl is involved. She is an inspiration for all of us, and she should never feel that she has been let down by the system,” he says.
“There are very few people in the world who really care about deaf and mute children such as mine,” says Nazir Ahmad Bhat from Baramulla, whose two sons Mohammad Ashraf and Showkat Ahmad are sportspersons. But for Arwa, who dreams of becoming a doctor, and her family, all of this has come at a cost.
“Last year, I had to accompany these players to different parts of Kashmir and various offices of sports organisations. I missed a lot of classes and was reprimanded by my teachers,” says Arwa.
“I am an autorickshaw driver, and I want to provide my children, especially Arwa, with a good education. But I struggle to do that because I find it very difficult to keep my house running,” says Arwa’s father, Imtiyaz Ahmad Bhat. Arwa’s younger brother Abu Zar is a student of Class V but her elder brother Arbaz dropped out of school in Class X four years ago after he met with an accident.
“I don’t think my dream of becoming a doctor will ever come true because I belong to a very poor family. At times, my father doesn’t have money to even deposit my school fees. This is why I was moved from the Fayaz Educational Institute in Naikbagh to the Government High School in Nowgam. But I will still try to complete my education,” says Arwa.
Yet, at the end of the day, Arwa says the joy that she sees on the faces of her players is what makes her go to sleep with a smile.
(From indianexpress.com)