A man of God does not make others the target of his negative feelings. Instead, he diverts them towards God. 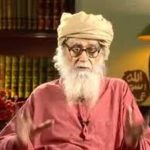 There are many ways in which God maintains the equilibrium of nature. One of these ways is diversion; that is, the channeling off of a force that has reached excessive proportions. Think of the amount of rain that falls in the rainy season. Immense damage would be done if it were to remain in cultivated and populated areas. So what nature does in such situations is provide the land and human population with an amount of water which is only just adequate while the rest of the water is diverted into rivers.
Man has made use of this principle of diversion in the building of dams. The purpose of a dam is to control the free flow of water in a river. Whenever there appears to be a surplus water, the excess amount is channeled off in another direction. In this way, the river is prevented from deluging the surrounding area. This water then flows into a large pool, or reservoir.
This principle of diversion should also be applied to human society. If one lives with others one is bound to have cause for complaint against them from time to time. These grievances will end in social strife if allowed to escalate. The smooth running of society will then become impossible.
This strife and conflict can be avoided only if a person finds an outlet for his excess emotion. This is the function that faith in God and the hereafter performs.
Faith in God enables one to turn to Him for recompense in times of grievance. A man of God does not make others the target of his negative feelings. Instead, he diverts them towards God. The deluge of his emotions, which might have caused immense damage to human beings, falls instead into a diversion pool.
(sundayguardianlive.com/opinion)