Nepal – A Shock Greater than the Earthquake

Syed Habeeb carried relief for quake-devastated people in Nepal but returned with lessons few mortals could teach him. 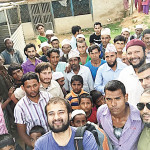 “Shalaam shab” is one phrase that rings in my ears whenever I think of a Gurkha. Images of the fiercely loyal, wrinkle faced, ever-smiling security man ‘Bahadur’ are difficult to be erased from my childhood memory.
Little did I realize that one day I would find myself perched at the Gorkhaland Hills in Nepal, bringing relief for the quake-devastated households. The temblor measuring 7.8 on Richter scale that struck Nepal in April caused the worst disaster east of the district of Lamjung, about 83 kms from Gorkha Hills. We, a team of three friends from Bengaluru and Mangaluru set out to contribute our bit to the massive relief operations undertaken by the NGOs across the world. The work is still on even while I pen these lines in July. We flew Bengaluru-Delhi-Kathmandu and had the first experience of landing in a foreign destination sans visa.

Tell-tale evidence
Kathmandu bore tell-tale evidence of the massive quake with buildings reduced to rubbles and several still standing ruptured. However, the onward journey would reveal that the old and small houses made out of mud and gravel, standing intact. Our destination was Gorkha Hills about 170 kms from Kathmandu. Leading us on the disaster trail was our driver Khem. We also had Ustad, a local volunteer, as our guide. It was a rough ride on a Scorpio along and over the hills vulnerable to landslide. The tedium of the journey was relieved by the incredibly picturesque hills and gushing stream. Inserted amid them were small homes with doe-eyed, puffy-cheeked kids peering out of the doors and windows. Often we would be face to face with hanging rope bridges with single bucket seats hanging between gorges with water gushing underneath. These manually propelled cable cars allowed access between two hills.
Khem drove with extreme caution. Yet there were moments of anxiety as our Scorpio would sometime bump and glide. He took us to Bagh Dogra, a small village and home of our guide. The place we stayed was a recently constructed small shelter with a room to relax and four cots in the open air to sleep. We got into action by noon. There were a total of seven villages in the vicinity with almost 400 plus families, majority of them being Muslims. We completed the relief material distribution in about two hours.

Lesson from Asrang
Our next port of call was village of Asrang, the largest of the villages, about 13 kms from Bagh Dogra. The ride ahead was rougher than what we had before. Yet we saw people climbing up hills with reasonably large amount of luggage tucked at their backs or balanced on heads. Asrang had 162 families in all. The quake had leveled several flimsy dwellings to a mere rubble. The local mosque was partially damaged while the Arabic school was a pile of debris. Yet, there were smiles and cheers on the faces.
As the villagers gathered, we were listening to melodious recitation of the Holy Quran from children in their early teens. Soon we were talking to them about calamities and counseling them patience in the face of adversity as God puts his servants to trials and tribulations to serve as reminders. Audience was attentive, greetings were exchanged; adolescents related their learnings with us; and at the end we announced the mode and manner we would distribute the relief. We asked them to come to the dais by turn and receive cash covers. Names of eight household heads were called out. But to our complete surprise, none of them stepped forward to claim the cover. Uneasy at this unexpected lull, I nudged my colleague to see if everything was fine. We did an encore. A relatively better dressed gentleman stepped forward and said most families in Asrang were financially pretty stable and would fend for themselves despite the earthquake. He went on to add that every family had someone working in the Gulf and they were decently paid. There was consensus among them that there were individuals other than them who deserved it more. Soon names of 17 widows cropped up, who they opined, could be the rightful recipients and were handed over the covers.

Self-negating
The self-negating proclamation came as a blot from the blue for the team. It was more so for our driver Khem. What could have caused a stampede in places struck by a calamity like this, had had no takers. More intimate interactions led an elderly person to come out clearly: “Son! We can pretend to be in need and take money from you, but how can we answer the Almighty who is watching us and Who is all-knower.” I could barely hold my tears and was struggling for words. We stayed there till prayers, and returned to the base camp after having prayed with them. The happy faces, the contented souls are still riveted on our retinas. I have carried this message, ‘It is these contented individuals who live their lives. We the busy fellows from the metropolitan cities merely survive.’ During our return drive, we spoke little among ourselves. The simpletons from Asrang had left us in a stupor with an enduring message to be contemplated lifelong.

Message for Life
It is said that there are always three paths in life: the wrong, the right and the good. It is always easy to take the wrong path as it seems effortless and taken by most. It is also very lucrative to take the good path, as this offers us mortals, the approval of people, quick wealth and fame. Mankind succumbs to this shortcut as it compels us to please others and in the process make quick material gains.
Let it be known that it is the right path which more than often goes against oneself and has no assurance of gains of any kind. It is a tough but a preferred path trodden by very few in this world – the prophets, the legends and the gentlemen extraordinaire. To me, people of Asrang are no less than legends who unanimously believed in building their lives around principles. The 74 aftershocks of the earthquake could barely shuffle them from the high moral pedestal they were perched upon.