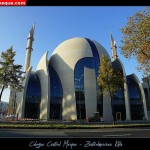 Cologne: Inviting non-Muslim neighbors to have a closer look at Islam, German Muslims opened the doors of their mosques, driven by hope to offer them a true image of Islam as well as to eliminate prejudices spread by media. The Muslim Coordination Council in Cologne said the open house events across the country focused on young Muslims in Germany and highlighted their stories. Thousands of visitors attended events held at hundreds of mosques in Germany last month. Germany’s Muslim Coordination Council, a platform bringing together the four largest Muslim organizations in the country, expressed hope that with the “Open mosque day” they will be able to present to German society the various aspects of Muslim community life and answer questions on Islam. The Muslim Coordination Council is made up of a number of Muslim organizations across Germany, including the Turkish-Islamic Union of Religious Affairs (DITIB), the Union of Islamic Cultural Centers, the Islamic Council, and the Central Council of Muslims. It organizes the annual open house events on October 3 to dispel common myths held against Islam. Germany has Europe’s second-biggest Muslim population after France, and Islam comes third in Germany after Protestant and Catholic Christianity. It has between 3.8 and 4.3 million Muslims, making up some 5 percent of the total 82 million population, according to government-commissioned studies. n
[Extracted from (www.onislam.net/english/news/europe)