Muslim countries should impose strict and exemplary punishments on those who do not honor the rights of non-Muslims to life, freedom and religion. 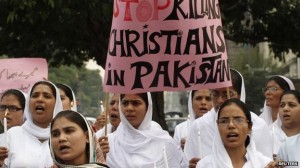 God says in the Quran: “Mankind! We have created you from a male and female, and made you into peoples and tribes, so that you might come to know each other. The noblest of you in God’s sight is the one who fears God most. God is all knowing and all-aware. (Qur’an 49:13).
This verse reflects one of the most distinguishing attributes of God, which is His being the source of all creatures, nations and tribes. It reveals that the sole purpose of human diversity is establishing harmony, rather than division, among the world community. That is the true picture of multiculturalism in Islam.
Given this, it does not behove Muslims to seek to distance themselves from other communities by building up impermeable boundaries based on culture, religion, caste, colour, language etc. Going by the essential Islamic laws enunciated in the Quran, Muslims have no legal superiority or privilege over non-Muslims. There is compelling evidence in the sources of fiqh (Islamic jurisprudence) that establish the full liberty for non-Muslims in Muslim-majority countries to practise their religions, follow their cultural customs and rites and lead their lives as per their own choice. No coercion or restriction can be inflicted upon them. They are allowed to undertake any business enterprise and adopt any profession they like. Although Islam enjoins upon its followers to profess belief in only one God, it has never permitted forcibly converting the adherents of other religions. Freedom of religion is strongly protected in Islam and fully enshrined in the Quran as in the in the following verses:
“Let there be no compulsion in religion: Truth stands out clear from Error.” (2:256)
“And say: The truth is from your Lord, so let him who please believe, and let him who please disbelieve.” (18:29)
“And if your Lord had pleased, surely all those who are in the earth would have believed, all of them; will you then force men till they become believers?” (10:99)
Therefore, Muslim majority countries where religious minorities are persecuted for their religion are clearly violating basic Islamic laws, as well as basic human rights. After all, it was in God’s scheme of things to create so many different communities following different religions. God Himself mentions this in the Quran, pointing out the reason behind it in the following verse:
“If God had so willed, He would have made you a single people, but (His plan is) to test you in what He hath given you: so strive as in a race in all virtues. The goal of you all is to God; it is He that will show you the truth of the matters in which ye dispute” (6:48)
Going by the above Islamic teachings, the recent attack on a Pakistani church targeting the country’s vulnerable Christian minority in which scores of innocent civilians were killed and burnt alive should be strongly denounced as completely and brazenly anti-Islamic. It is high time Muslim leaders across the world openly decry these vicious anti-Islamic and inhuman acts and ensure that such grave violations of Islam are not repeated anywhere. Muslim countries should impose strict and exemplary punishments on those who do not honor the rights of non-Muslims to life, freedom and religion. Any individual or group who indulges in such a heinous crime should be seen as the biggest enemy of Islam and humanity, even and, in fact, particularly if, they ironically do so in the name of Islam. Let us not forget the Prophetic saying that “such people will not be able to even smell the fragrance of the paradise”, let alone entering it and enjoying heavenly bliss.
The Prophet of Islam (peace be upon him) repeatedly ensured the protection of the rights of the People of the Book (Jews and Christians) as well as other Ahl al-Zimmah (non-Muslim citizens of Islamic state). During his period, in Arabia, non-Muslims were protected even against foreign invading enemies. Speaking generally about all non-Muslims living in an Islamic country, the Prophet said, “Anyone who kills a dhimmi (non-Muslim citizen of a Muslim country) will not smell the fragrance of paradise.” (Nasai). It is also reported that the Prophet said, “He who hurts a dhimmi (non-Muslim citizen of Muslim state) hurts me and he who hurts me annoys Allah.” (reported by Imam Tabrani). The Prophet also declared: “Whoever hurts a non-Muslim, I am his adversary, and I shall be an adversary to him on the Day of Rising.” (reported by Al Khateeb). Another hadith report quotes him as having said, “On the Day of Resurrection, I shall dispute with anyone who oppresses a person from among the non-Muslims, or infringes on his right, or puts a responsibility on him which is beyond his capacity or takes something from him against his will.” (reported by Abu Dawood).
In the light of this evidence from the Quran and the sayings attributed to the Prophet, there can be no doubt at all that the dastardly attack on the church in Pakistan, and other such incidents by self-styled Islamists, is wholly and brazenly anti-Islamic. Wrongly seeking to justify their crimes in the name of Islam only makes their sins even more heinous in God’s eyes.
(The writer is an Alim and Fazil (classical Islamic scholar) and is presently pursuing his M.A. in Comparative Religions from Jamia Millia Islamia, New Delhi).