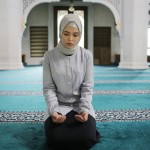 Playing the role of a Muslim student in her latest film, a young German actress has revealed that she felt a strange serenity when she put on Hijab for the first time. “When I put on my headscarf and saw only my pure face, I had initially a strange feeling,” Ava Celik said. “It may have been due to the preparation for the role, because when I wore the costume, I went upright at once and had an unusual serenity. “On the road again, I saw turns and looks at me, for two or three times. But I could not really interpret the looks,” she added. Celik, a 25-year-old young German actress, is playing the role of Sevda, a young Muslim high school student in Berlin who dons a hijab in the film produced by German official TV channel, ZDF. She plays an intelligent Muslim who has liberal, non-religious parents. This girl opted voluntarily for life as a devout follower of Islam. The movie tackles integration in the German community, portraying Muslim women as not the suppressed sections of society.
(Extracted from www.onislam.net)