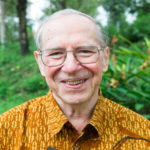 Jesuit Father Karl-Edmund Prier was attacked by a suspected militant while he was celebrating Mass
An 80-year-old Catholic  priest in Indonesia, who was attacked and wounded in his church by a sword-wielding man, says he has forgiven his attacker. A suspected Muslim extremist called Suliyono attacked Dutch-born Jesuit Father Karl-Edmund Prier during a Mass at St. Lidwina Church in Yoyakarta on Feb. 11. Three other Catholics were injured in the attack, which also saw the attacker decapitate Mary and Jesus statues, before being shot and wounded by police.
“I forgive Sulyono with sincerity. Every day I pray the Our Father prayer, which states that as we forgive those who trespass against us,” wrote Father Prier in a letter posted on the bishops’ commission on social communication website on Feb 24. Father Prier said he could have run away during the assault but did not. “However, my conscience said: ‘Do not go. The good shepherd should not run when wolves come.’ I remained standing on the altar to divert the attacker’s attention to me,” he said. “Through the middle aisle of the church, with a long sword raised high, he shouted, Allahu akbar!” he added. The Christian priest also said that some Muslims were very kind and helped clean up the church after the attack. Archbishop Robertus Rubyatmoko of Semarang appealed for no acts of revenge over the attack. “Let us just pray for the recovery of the victims and the change for the perpetrator’s life,” he said.
(Extracted from ucanews.com)