An Idyllic Time in Isfahan

Islamic Voice 0 September, 2012 12:00 am
The Europeans Who Chose Mystical Islam
Cairo: Beyond the Pyramids
Istanbul – At the Crossroads of Continents

The people of Isfahan are friendly and affectionate. Their hospitality overwhelmed me and as I boarded the plane from Tehran to return home, I carried pleasant memories of not only the ancient churches, mosques and bazaars, but also the ever smiling faces of the people. 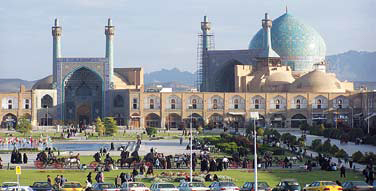 I visited Iran in July 2012, to participate in the “World Conference on Women and Islamic Awakening”. After the conference, the delegates were invited to visit Isfahan, the historical city of Iran. It is located about 340 km south of Tehran and is Iran’s third largest
city after Tehran and Mashhad. Isfahan is located on the main north-south and east-west routes crossing Iran, and was once one of the largest cities in the world. It flourished from 1050 to 1722, particularly in the 16th century under the Safavid dynasty, when it became the capital of Persia for the second time in its history. Even today, the city retains much of its past glory. It is famous for its architecture, with many beautiful boulevards, covered bridges, palaces, mosques, and minarets.

The Naghsh-e Jahan Square in Isfahan is one of the largest city squares in the world and an outstanding example of Iranian and Islamic architecture. It has been designated by UNESCO as a World Heritage Site. The city also has a wide variety of historic monuments. In 1598, Shah Abbas moved his capital  from Qazvin to the more central and Persian, Isfahan. This ushered in a golden age for the city which lasted until it was sacked by Afghan invaders in 1722. The capital subsequently moved several times until settling in Tehran in 1795. Today Esfahan, the third largest city in Iran, produces fine carpets, textiles, steel, and handicrafts. The city is located in the lush
plains of the Zayandeh River, at the foothills of the Zagros mountain range. Isfahan is one of the most spectacular cities of Iran from the point of tourist attractions. There are magnificent monuments which belong to different periods, fantastic tile-works, outstanding
architecture of the mosques and glorious palaces, old colourful  houses, fascinating bazaars and minarets.

The Jameh Mosque is the grand, congregational mosque of IsfahÄn city. The mosque is the result of construction, reconstruction, additions and renovations on the site from around 771 to the end of the 20th century. The Grand Bazaar of Isfahan can be found towards the southeast wing of the mosque. This is one of the oldest mosques still standing in Iran, and it was built in the four-iwan architectural style, placing four gates face to face. An iwan is a vaulted open room. Construction under the Seljuqs included the addition of two brick domed chambers, for which the mosque is renowned. The south dome was built to house the mihrab in
1086″87 by Nizam al-Mulk, the famous vizier of Malik Shah, and was larger than any dome known at its time. The north dome was constructed a year later by Nizam al-Mulk’s rival Taj al-Mulk. The function of this domed chamber is uncertain. Although it was situated along the north-south axis, it was  located outside the boundaries of the mosque. Iwans were also  added in stages under the Seljuqs, giving the mosque its current four-iwan form, a type which subsequently became prevalent in Iran and the rest of the Muslim world. The Chehel Sotun (Forty Columns) Palace located in the center of Qazvin was built during the reign of Shah Tahmasb I (1524-1576) of the Safavid dynasty (1501-1722). Covering an era of 500 cubic meters, the mansion has been turned into a museum and has many rare artifacts belonging to the Safavid and Qajar era.

Si-o-se Pol, which means 33 bridges or the bridge of 33 Arches, also called the Allah- Verdi Khan Bridge, is one of the eleven bridges of Isfahan. Commissioned in 1602 by Shah Abbas I, from his chancellor Allahverdi Khan, it consists of two rows of 33 arches. There is
a larger base plank at the start of the bridge where the Zayandeh River flows under it, supporting a tea house.
New Julfa is a quarter of Isfahan located on the outskirts of the city. In the beginning of the 17th century (during the Safavid period), over 150,000 Armenians were moved there from Julfa Time in Isfahan … in Nakhichevan. New Julfa is still an Armenian populated
area with an Armenian school. Vank Cathedral, the Church of Bethlehem at Nazar Avenue, Saint Mary church at Julfa Square and the Yerevan church in the Yerevan area are all here. Due to western, mainly American propaganda, people in general, in ignorance believe that Iran is a terrorist country. When one visits Iran and moves around in different cities, one realizes that Iranians are lovely people and great hosts. Women in Iran work in different capacities, including decision-making, in hotels, at the airports, in museums, in military, police-force and even in the Parliament. Women also work as scientists and pilots. I interacted with women doctors who have made their mark in the male bastions such as cardiology, gastroenterology and neurology. Women students outnumber malestudents in the universities. After my visit, I felt that it is high time that the international community works to remove sanctions
against Iran which are imposed under western pressure.