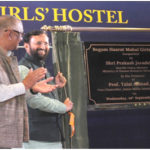 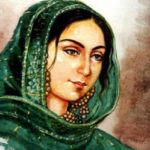 New Delhi: The Begum Hazrat Mahal Hostel for Girl Students was commissioned at the Jamia Millia Islamia on September 28 by Union Human Resources Development Minister, Prakash Javadekar. The 4-storey hostel will accommodate nearly 400 inmates. Javadekar lauded Jamia’s role in promoting education and compared it with the Banaras Hindu University and Aligarh Muslims University which were all set up around the same time to promote national spirit among the communities benefitting from them. Speaking about the facilities being provided to the students of Jammu and Kashmir by the Central Government under the Prime Minister Scholarship Scheme, he said that since the Modi government took over, the scheme has stabilised. Earlier, there were only 2 supernumerary seats for students from JandK in institutions outside the State, but now with the number going up to 10, there is a sizeable number of students who are availing this scholarship, which amounts to nearly 2 lakh per student per year.
Jamia Vice Chancellor Prof. Talat Ahmad speaking on the occasion said that the University has bagged as many as 18 GIAN (Global Initiative of Academic Networks) courses, which was one of the highest for Central Universities in India. “It is a matter of satisfaction that we have been awarded Grade ‘A’ by NAAC”, he said.
Begum Hazrat Mahal, is also known as Begum of Awadh, wife of Lucknow Nawab Wajid Ali Shah. She was a renowned freedom fighter who rebelled against the British East India Company during the Indian Rebellion of 1857. After her husband had been exiled to Calcutta, she took charge of the affairs in the state of Awadh and seized control of Lucknow. She also arranged for her son, Prince Birjis Qadra, to become Wali (ruler) of Awadh; However, he was forced to abandon this role after a short reign. She finally found asylum in Nepal where she died in 1879. Her grave is located in Kathmandu.