Islamic Voice 0 September, 2019 12:00 am
Cryptocurrency – A Currency or a Product or Commodity?
Key Indian Criminal Laws now available in Urdu
Hope of Revival for Urdu in Uttar Pradesh

One software engineer from Delhi went out of his way to ensure that 32 girls from Jammu and Kashmir who were stranded in Pune were able to get back home safely.
After the abrogation of the special status of Jammu and Kashmir, there have been restrictions imposed on communication and the movement of people in the state, which has been a source of worry for the state’s residents living outside. But one software engineer from Delhi went out of his way to ensure that 32 girls from the state who wanted to get back home safely were able to do so.
On August 5, Harminder Singh Ahluwalia went live on Facebook to tell all Kashmiris outside the state who were feeling unsafe that they could either contact him or take shelter in the nearest gurdwaras. The post went viral and 32 girls from Kashmir, who were trying to get back home, got in touch with him.
“They were panicky,” he told indianexpress.com over the telephone. “I got a call from a woman named Rukaya, She told me that there were 32 Kashmiri girls, all from underprivileged families, just waiting to get back home, because of the recent government moves in Kashmir.”
The girls, who were between 17 and 22 years of age, were in Pune for a nursing training and placement programme as part of the Deen Dayal Upadhyaya Grameen Kaushalya Yojana. Ahluwalia said the girls told him that they just wanted to go back home as they couldn’t get in touch with the families due to all communication lines being disrupted.
The coordinator of the contingent contacted the state government and was assured assistance from the Army once they reached Srinagar. But they didn’t have the funds to get there. Ahluwalia then sought donations to fund the girls’ journey back home with another Facebook live August 8.
“A Sikh businessman was quick to contact me and sponsored the air tickets for the girls and four volunteers,” Ahluwalia said.
On August 9, the group reached Srinagar, and with the assistance of the Army, all of them were escorted home and reunited with their families.
Ahluwalia’s actions were widely praised on social media. Ahluwalia said he had decided to help because after the Pulwama terror attack, there were instances of Kashmiris outside the state being targeted and he didn’t want the same thing to happen to the girls. 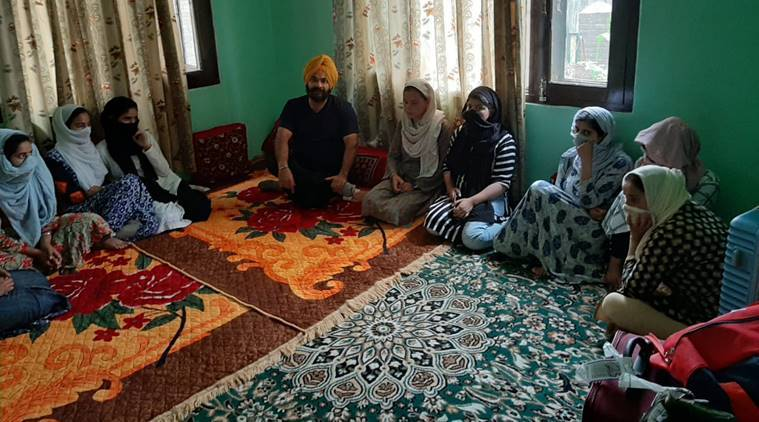 Harminder Singh Ahluwalia with some of the girls