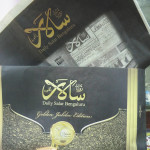 Urdu Daily Salar completed 50 years of continuous publication. It was founded by redoubtable Urdu writer Mahmood Ayaz in 1964. The reigns of the management passed over to the Al-Ameen Group which acquired the newspaper in 1979 and modernized its functioning and printing. The office moved from Cavalry Road (now Kamaraj Road) to St. John’s Church Road where Janab Ibrahim Khaleelullah Khan stewarded its progress for several years to come. The offices of Salar have moved to Hosur Road that runs along the Bengaluru’s famous Lal Bagh Botanical Garden in the impressive headquarters of the Al-Ameen Group. For the last few years, the newspaper is also published simultaneously from Hubballi and Gulbarga, two cities with considerable Urdu readership.

Most representative
Half a century of voyage is worth celebrating. Salar deserves compliments, for it is by far the most popular Urdu daily in Karnataka and can claim to be the most representative spokesman of the Urdu-speaking Muslims in the State. It has considerable readership in Urdu population in small towns of neighbouring Tamil Nadu too. It has vastly improved its visual appeal through acquisition of the state-of-the-art composition and printing technology, though the same cannot be said about the layout and designing.

Eclecticism
Salar has endeared itself with a vast majority of the Urdu readers through its eclectic choice of content. It does not exercise any selection when it comes to publishing news about religious, cultural, educational, social, economic and even political activity. All and sundry groups have found patronage under its news columns. No room for complaint has been provided by the editorial staff. Even photographs are generously splashed across its pages. Startups, amateurs, novices and entrepreneurs in all fields and sectors receive unstinted support from its columns. One cannot but admire this attitude of dispensing with editorial discretion in matters of selection of news, for a newspaper that claims to represent a small minority”whose language is increasingly losing its hold over its speakers”cannot afford to leave out any section unhappy. It has immense socio-commercial significance. Even in matters religious, everyone has access to its pages, regardless of the sectarian affiliation. Its literary edition on Mondays has nurtured good many budding short story writers, poets and critics and has no parallel in India.

Considerable Advt Support
Over the last few years, it has considerably increased coverage of community news within Karnataka. It seems the daily is also patronized by advertisers of all hues. Going by the limited readership and appeal of Urdu, one cannot but only appreciate Salar’s consistency in matters of content, policy line and please-all attitude. Sustainability is as much essential for media as credibility. Salar has excelled in achieving this. The very survival of Urdu newspapers in forbidding circumstances that surround Urdu almost everywhere, is a miracle. Salar has weathered the vicissitudes with courage and steadfastness.

Trite and Hackneyed
Urdu does not attract the best of talents these days. The wages an Urdu newspaper can offer to its scribes can only be directly proportional to the advertisement support it receives from the community. One therefore should not grudge their financial incapability to retain talent, if ever it gets hired. This has been the bane of Urdu journalism. This impacts the content it is able to offer. Salar has been no exception in this regard. Despite half a century of its existence, the daily does not find itself in a position to pay remuneration to columnists, contributors, commentators and commissioned writers. Consequently, the fare it is able to dole out in matter of views is insipid at best and mediocre at worst. This becomes more noticeable for a Karnataka reader who is essentially bilingual. Anyone and everyone who can produce some prose in Urdu, finds himself in print. As a result, much of the content on its edit page is dull, trite and hackneyed, reflecting the grievance-mindedness and all-pervasive gloom that most of the mullahs as well as leaders from the states of Uttar Pradesh and Bihar are good at disseminating. It fails to offer any profound analysis of political trends, economic situation or changing mores of the society. Articles on religion are totally run-of-the mill type without any creative interpretation of the tenets for the current age. In most cases, they are recycled year after year for similar kind of occasions. The daily seems to be in awe of the traditional Islamic scholars who show no willingness for any change in the mindset and are status quoists.

Publicity Organ
As is the wont of most Urdu newspapers, Salar too has been the victim of its management’s eagerness to use it as a vehicle of publicity. No day passes without some insignificant function getting highlighted in copious company of photographs. But these sins would have been forgivable, if only the daily had played neutral in crucial issues affecting the community such as crisis in Amanath Bank or disappearance of the Al-Ameen Islamic Financial Investment Corporation. But most of its readers knew well the limitations that the newspaper had in offering objective reporting on these issues. The general adulatory references that the daily attaches to some of the culprits of these scams are too well known to expect factual report or in-depth, analytical reviews.
Yet despite all these pitfalls, Salar has all the potential to grow into a virile daily, if it could transform itself into a serious newspaper, pushes for change in the mindset, brings in fresh blood, casts out the deadwood and professionalises its structure. This a tall order. Hard decisions are difficult to come by. Not merely the management, even the readers would have to be groomed to accept the change.