Giant Pages of Ancient Copy of Quran on Display 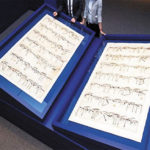 Washington: Two consecutive giant pages of the Qur’an are being displayed at the show “The Art of the Qur’an: Treasures from the Museum of Turkish and Islamic Arts”, at the Arthur M. Sackler Gallery in Washington. The sprawling pages, each measuring 5 feet by 7 feet, have rows of calligraphy standing 8 to 9 inches high. They date from about 1400 and have been on long-term loan to the Smithsonian museum. The passage on display is from a chapter explaining that “signs of God and evidence of His goodness are all around,” according to Simon Rettig, assistant curator of Islamic Art. The show brings together manuscripts and folios from the museum in Istanbul with manuscripts from the collection of the Sackler and Freer Gallery of Art, which together form the Smithsonian’s Asian art museum. Though the Arabic text of the Qur’an was fixed as early as the late 7th century, the exhibit showcases the variety of styles of calligraphy and illumination employed over the centuries. The works span nearly a millennium, dating from the late 7th or early 8th centuries to the 17th century.