The North Road Mosque in Bengaluru has set an example by expanding its activities to constructive educational activities involving students. 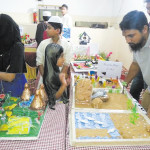 Bengaluru: An exhibition on Qur’an and Science was organised on December 17, at Masjid-E-Munawwara, Cooke Town. The mosque runs a Madrasa, Mumtaz- o- Jabbar School of Deeniyat. The students of the madrasa presented different models based on the topics of Qur’an and Science, history of Makkah, topics from the Qur’an and Hadith under the guidance of their young and dynamic teacher Moulvi Syed Nawaz Meftahi. Conventionally we know that the role of the mosque is limited to the five times prayers, and other few charitable activities, but this mosque which is also famously known as the North Road Masjid, stands out and inspires others in the city. Moulvi Nawaz, who pioneered the idea, mentions: “It is very important for our children to know science, since many innovations in science are done by Muslims. Since ages we do not know the facts that all the mastery in astronomy, weather forecast and medical operation equipments were invented by Muslims. “All the credit goes to the parents. It was the parents who turned out to be so creative, they had put their best efforts in helping children, in preparing the script while presenting the model to the visitors. They stayed with us for many hours, a day before, helping and setting up the premises for exhibition,” says Syed Nawaz Meftahi.