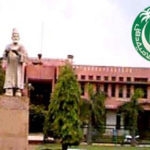 Jamia Millia Islamia will be launching its Korean Language Programme from the academic year 2017-18. The University has entered into a Memorandum of Understanding (MoU) with the Korea Foundation to teach Certificate and Elective Courses in Korean Language.  As part of the understanding between the two institutions, Korea Foundation has appointed a Korea Foundation Visiting Professor for the teaching of these courses.
A high-level delegation from the Academy of Korean Studies called on Prof. Talat Ahmad, Vice Chancellor and extended all possible support to strengthen Korean Studies in JMI. The delegation comprised of Vice President of the Academy, Professor Shin, Jong-Won, Professor Do-young Kim, Korean Foundation Visiting Professor and Dr. Kyung Rhan Chung, Director, Centre for International Affairs and other colleagues from the Academy.
Speaking on the occasion, Prof. Talat Ahmad thanked Korea Foundation and the Academy of Korean Studies for extending unstinted support to JMI in this regard and proposed launch of these courses. The then Korean Ambassador Mr. Cho Hyun while delivering a distinguished lecture on ‘Synergy between India and South Korea: Opportunities for Indian students’ on February 10, 2017 had announced full support of the Korean embassy for the launch of the Korean Language Programme in JMI.