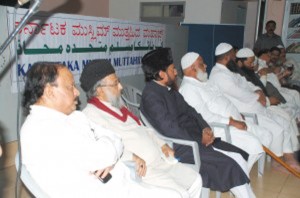 Bangalore: The Karnataka Muslim Muttehada Mahaz (KMMA), a representative body of the various Muslims organizations in the State, has reminded the Congress Government in the State of the Party’s promise to appoint a commission to look into the cases pertaining to the arrest of Muslim youth under trumped charges, appointment of a Muslim member to the Karnataka Public Service Commission (KPSC), setting up fast track court to adjudicate the cases of incarcerated youth under charges of terrorism and police atrocities.

In a meeting with the Muslim MLAs and Ministers on January 2, Convener of the Mahaz, Mr. Masood Abdul Khader resented the indifference towards the promises made by the Congress Party prior to the elections in May 2013. He said the Chief Minister Mr. Siddramaiah has not replied to the letter sent to him last September seeking an appointment with him to take stock of the situation pertaining to the Muslim minority issues.
Mr. Khader pointed out that the Government is yet to induct a Muslim member into the KPSC and in places like Udupi and Davangere, local administration is not allowing construction of mosques despite the managements securing all necessary approvals from the civic bodies. He cited a case in which houses earmarked for minorities under Ashraya Housing Scheme were allotted to only members of the Christian community.
Of the 11 Muslim MLAs in Karnataka Assembly, only four, namely Mr. Qamarul Islam, Mr. Roshan Baig (both ministers), Dr. Rafeeq Ahmed (representing Tumkur) and Mr. Iqbal Ansari (Gangavati) attended the meeting. MLC and former minister Naseer Ahmed and former Union Minister C. K. Jaffer Sharief were also present.
Mr. Qamarul Islam acknowledged the role of the Mahaz in consolidating the Muslim support in favour of the Congress party in the last elections and emphasized the need to prepare strategy for the forthcoming Lok Sabha polls. Mr. Islam who holds the charge of Municipal Administration and Waqf in the State Government said a special cadre of Muslim employees will be created in the State under the amended Central Waqf Act and 253 new employees would be recruited. He said, of the 395 staff members in the Waqf Department currently, 305 had been borrowed from other departments. He said, the last budget i.e., 2013-1014, had made a provision of Rs. one crore for special training of waqf officers. He said the Pre-Matric Scholarship have been made online and payment was being made through cheques. He also informed that in eight of the State’s 28 districts, the Information offices of Minorities Welfare Department have begun operations.
Naseer Ahmed MLC said the proposal to set up a commission to look into the arrest of innocent youth under Terrorism related acts was under active consideration of the State Government.
Mr. Abdul Khaliq, senior journalist, Pasban, stressed the need to file RTIs to find out the progress of minority welfare schemes in all the districts.
Mr. Maqbool Ahmed Siraj, senior journalist, wanted to know as to what was being done to reverse the cancellation of the land Khata issued by the BBMP under the JDS Government for Jayanagar Eidgah in Bangalore. He said the previous BJP Government had cancelled the Khata issued under the chief ministership of Mr. J. H. Patel after prolonged struggle. He also emphasized the need to take peace delegation consisting of civil society activists and members of all religious communities to places where efforts are made to ignite communal tension and conflict. He said, the Mahaz need not reinvent the wheel and should adopt the 20-point agenda regarding Muslim issues and grievances presented by the Zakat Foundation of India. He pointed out the community should move from demanding welfare schemes (like Shadi Bhagya) to development scheme stressing that development schemes will boost confidence while welfare schemes would merely encourage demands for freebies. He said real empowerment comes through higher representation in bureaucracy as 97% decisions are taken by bureaucrats and a civil service officer remains in decision-making seat for 32 to 35 years while politicians come and go every five years.
Moulvi Iftikhar Qasimi, President, Jamiatul Ulema in Karnataka there was need to hold accountability sessions with the members representing Muslims in the legislatures. He had a spat with Mr. Jaffer Sharief when the latter objected to Jamiat president Mahmood Madani’s recent statement wherein he warned the Congress against creating BJP-phobia.
Maulana Maqsood Imran, Peshimam, City Jama Masjid called for defusing communal tension at local levels and stressed the need to adopt the agenda of the Zakat Foundation of India. Mr. Abdullah Javeed of the Jamaat e Islam, Karnataka said the Muslim leadership was extremely weak in the state. Mr. Naveed Ahmed wanted the Mahaz to take up the issue of drop-out of Muslim children from school.
Nasrullah Shariff, social worker from Chikmagalur the community should organize the coaching for Muslim students by organizing coaching classes for every three districts at a single place for civil services. Dr. Zaheeruding from Mysore wanted the entire waqf income to be directed for education of the Muslim students. Mateen Arif, journalist form Tumkur said, Muslims themselves were primarily responsible for encroaching upon waqf properties.
Kannada Journalist B. M. Haneef invited the attention of the Muslims towards exaggerated stories of ‘minorities appeasement’ appearing in the Kannada newspapers.
Iqbal Ansari, JDS MLA and former minister, emphasized that Muslim must be given reservation in legislatures.
Mahmood Qazi, advocate, Bijapur, large chunk of waqf properties were under unauthorized occupation of Central as well as State Government departments and several historically important mosques were locked by the Archaeological Society of India.
Mahaz secretary Syed Tanweer Ahmed welcomed the participants. Mr. Atharullah Sharieff moderated the session.