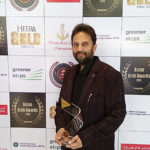 Bengaluru: Nasheman, Urdu weekly from Bengaluru with a record of consistent publication has completed 57 years since its inception. Known for its fearless comments, the weekly was founded by Mr. Usman Asad. It is now edited by his son Mr. Rizwan Asad.
Nasheman is considered to be one of the leading weekly journals in Urdu language and carries commentaries and opinion pieces on recent issues and events. With a pan-India circulation, it reaches nook and corners of India and read by a large number of Urdu-reading people everywhere. It also launched its website in English language.
In a press release Rizwan Asad said it will celebrate its 57th anniversary on January 27 (as we are going to press). The ceremony will be presided by Ms. Nowhera Shaikh, CEO of Heera Group of Companies who will give away the ‘Nasheman Heera Awards’ to people who have excelled in the field of media, social service and entrepreneurship.