Online Hajj Applications to be Encouraged’ 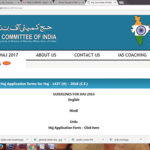 New Delhi: The Haj Committee of India will encourage more aspirants for Hajj to apply online and make payments through credit/debit cards in line with the cashless transactions being promoted by the Prime Minister Narendra Modi’s government.
The Hajj operations for the year 2017 (Hajj is likely to be performed around September 2) will begin on January 2, 2017 with applications being accepted online. Union Minister for Minority Affairs, Mr. Mukhtar Abbas Naqvi on December 20, inaugurated the new Haj Committee website in Hindi, Urdu and English languages. The website provides detailed information about Ministry of Minority Affairs, Dept of Hajj, regulations pertaining to Hajj pilgrimage, Haj Committee of India and private Hajj tour operators. The Ministry is also preparing a Mobile App for the Hajj pilgrimage.
Mr. Naqvi informed that 84,345 applications for Hajj pilgrimage were received online for 2016 Hajj which make up 11% of the total applicants. Maximum online applications were received from Maharashtra, followed by Uttar Pradesh, Kerala, Telengana, Jammu and Kashmir and Gujarat. He said the intending pilgrims will find the online applications much easier this year.
The Minister said 90,399 pilgrims performed Hajj in 2016 under the Haj Committee arrangements while 36,000 travelled through Hajj tour operators. The Hajj flights operated from 21 destinations within the country. He said the Ministry is making all efforts to smoothen the Hajj operations and all facilities would be provided to the pilgrims from India at Makkah, Madinah and all the places on the route of pilgrimage. He said he had met Saudi Ambassador Dr. Saud bi Mohammad Al-Saati in this regard who has promised to facilitate the arrangements.