Posting Clothes for the Needy

The box named ‘Aashrayam’, kept for people who want to donate clothes, at the Poojappura junction in Thiruvananthapuram. 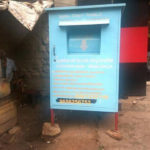 Thiruvananthapuram: ‘Aashrayam’ is the brainchild of a few youngsters. One morning in January this year, passersby noticed a sky blue box, almost like a letter box but much bigger than it, by the side of the road near the Poojappura junction. On the box was written an appeal to the public to deposit clothes for the needy. Before long, the box began filling up with clothes. Word of mouth spread, so much so that those who put it up had to come frequently to clear the collection. The box named ‘Aashrayam’ is the brainchild of a few youngsters who thought of contributing something for society, when they completed their studies. “This idea of a cloth bank was put to us by Fazil Musthafa, an NRI, whom we had met through Facebook. He and his friends had put up a few such boxes in the UAE. He helped us put this box at Poojappura. The response from the public in the first few months has been overwhelming,” says Siddique, one of the five persons behind the initiative, who passed out of the Kerala Institute of Tourism and Travel Studies recently. Public could drop their old or new clothes, washed and ironed. All of the five members of the collective live outside the city, around Parassala and Neyyattinkara. They collect the clothes usually on weekends, to distribute it to orphanages and tribal villages. “The owner of a textile shop and that of a tea shop near the box have the spare keys to the box, in case the box is filled up or if someone leaves the clothes outside the box.A majority of people have contributed clothes in good condition, although there have been a few instances of people dropping waste clothes. The collected clothes are sorted according to age and size and later distributed at appropriate places. This month end, we are planning to distribute clothes at a few villages in Attapady,” says Siddique.
(Taken from www.thehindu.com)