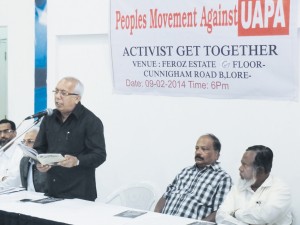 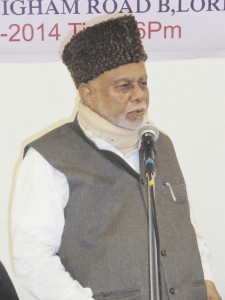 TADA and POTA are dead and gone but amendments to a new draconian law, the Unlawful Activities (Prevention) Act (or UAPA in short), passed by the Lok Sabha in January 2013, has brought the Act to haunt the members of Minority communities, Dalits, groups opposing ecological assets of the nation and the ones set against the creeping hold of capitalist lobby. The amendments to the Act (which was originally passed in 2008) were hustled through the Parliament on December 16, 2012 and were adopted without any debate and scrutiny. Obviously, the Government was using the scary atmosphere created in the wake of terrorist attack on Mumbai.
The Act though essential from the point of national security, mirrors provisions of the lapsed TADA and POTA and provides the authorities with unbridled power to detain innocent persons and trample upon their human rights. It is reminiscent of the two draconian laws under which Gujarat had arrested 18,686 persons followed by Punjab where 15,314 were detained. In both cases the detained persons belonged to minority communities, ie., Muslims and Sikhs. During the same period 15,225 Muslims were arrested in Jammu and Kashmir and 12,715 in Assam. The total detainees amounted to 77,500 but the conviction rate was only 0.81%. The TADA review committees had found that in most cases TADA was wrongly used.
The People’s Movement Against UAPA has taken up the matter with the Union Government and urged its repeal. Movement’s National Convener Kamal Farooqui says “amendments to UAPA provide the police ample powers to misuse the provisions to the maximum extent possible. It allows 90 day police custody for those arrested during which the police will have freedom to extract ‘confessions’ through torture”.
Mr. Farooqui who addressed a meeting in Bangalore, said extreme prejudices of the personnel in the security forces have played pivotal role in putting innocent youth in prisons without bail or time-bound trial previously. He said not alone minorities, the earlier draconian laws were used to detain public activists such as journalist Pawan Dasgupta, Chakradhar Mahato, activists against Ganga Expressway and to harass journalists.
Farooqui said under the provisions of the UAPA, any group could be declared a “Terrorist organization” or “unlawful association” with immediate effect. If done so, the government has got up to six months to establish the basis for this declaration before a specially constituted tribunal composed of a High Court judge nominated by the Government itself. The government must produce sufficient cause for declaring the association unlawful, but it can withhold evidence from the proscribed association on the ground that ‘public interest required non-disclosure’. Activists like Dr. Binayak Sen and the ones accused in Indore conspiracy case in Madhya Pradesh are examples of manifest misuse of the powers under the UAPA.
He said the doctrine of presumption of innocence means that every person accused of a crime is presumed to be innocent and burden is on the prosecution to prove all the elements of the offence beyond reasonable doubt. However, under the UAPA, he said, this presumption is denied to the accused.
Former Union Minister C. K. Jaffer Sharief, who also spoke at the occasion said, Parliament and the Judiciary are there to protect the law and the Constitution. Media also discusses the laws enacted by the Parliament. He expressed surprise at the passage of the UAPA without any serious notice by the media and the civil society. He extended his support to the Movement for seeking repeal of the UAPA. He said that any law that is against humanity, cannot be a law in favour of people or the Constitution.
Advocate Balan described the UAPA as ‘a black Act’ and said several lives have been ruined due to detention under this draconian law. He said from 1857 to 1947, the laws in the country were colonial, from 1947 to 1990 the laws were semi-colonial and from 1990 till now, the laws were neo-colonial. He said the UAPA will be challenged in the Supreme Court as it was undemocratic.
Mr. N. Babaiah, convener of the National Confederation of Human rights Organisations (NCHRO), urged repeal of UAPA as it would lead to increase of human sufferings. He said the Muslims were being targeted as permanent suspects. Mr. E. Abubakar, vice chairman of the of the People’s Movement Against UAPA, said the law terrorizes people and curbs civil liberties. He recalled that the CPM passed a resolution calling for repeal of UAPA a year ago. He said everyone wanted a tolerant India.
Advocate K. P. Muhammad Shareef said the vague and overboard definition of terrorism in UAPA may encompass a wide range of non-violent political activities, including political protests by minority populations and civil society groups, it authorizes warrantless search, seizure and arrest with wide authority and few safeguards. He said the Act allows detention without charge up to 180 days, including up to 30 days in police custody and creates a strong presumption against bail.
Shareef said the UAPA violates the norms of natural justice as it puts the onus of proof on the accused and not on the prosecution. He alleged that the UAPA was being used to detain poor tribals in West Bengal and Chhattisgarh, who were trying to stop the seizure of their precious farm land by mining companies.