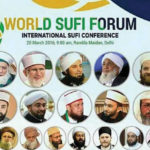 In a historical gathering, voices from India and several other countries that represent various Sufi traditions came together in New Delhi for the World Sufi Forum (WSF).  The four-day event had over 200 participants from over 20 countries who discussed ways to spread the pluralistic message of Sufism. It was organized by the All-India Ulama and Mashaikh Board (AIUMB), a body representing various dargahs in India.
Speaking at the inaugural session, Hazrat Syed Muhammad Ashraf, founder-president of AIUMB and an influential Sufi leader, thanked the visiting dignitaries for their participation in addressing various issues faced by Muslim communities across the globe. He said, “We are thankful to all the representatives present today for coming together to this historical event. A united global Sufi alliance will promote peace, humanity, love and spirituality both in India and abroad.” He added, “Islam spread in India due to the teachings of Sufi masters who gave the message of universal love. Over the last few decades, Islamic theology has been distorted to spread violence and hatred amongst people. A key concern of the World Sufi Forum will be how to counter these extremist ideologies”.
At the WSF, AIUMB gathered some of the brightest Sufi visionaries, intellectuals, academicians and social activists from around the world to discuss the need and importance of promoting tolerance and peace, including Professor David Peck, Dr. Alan Godlas and Kabir Helminski from USA, Damir Mukhetidnov from Russia, Dr Tahirul Qadri from Pakistan, Shaykh Hashimuddin al-Gaylani and Shaykh Afeefuddin Al-Jailani from Iraq, Tolegen Mukhamejanov from Kazakasthan, Shaykh Mohammad Bin Yahya Al-Kattani from Egypt, and Shaykh Mohammad Idrees Bouchibti from Morocco.
The AIUMB is a not-for-profit institution based in India that aims to celebrate the wisdom and teachings of Sufi Orders and Spiritual Leaders. It believes in complete end to terrorism, opposes fanatic ideologies and seeks to promote peace and harmony among Muslims and people of other faiths as well as among Muslims themselves.
(for more information on the AIUMB, see www.aiumb.org)