Islamic Voice 0 January, 2018 12:00 am
Syrian Refugee Girl: A Winner in the Water
Woman Ensures Dignity in Death for Unclaimed Bodies
Women in the Early Days of Islam

The teenagers, who hail from the western city of Herat, took the Entrepreneurial Challenge at the Robotex festival, which was held in Estonia. 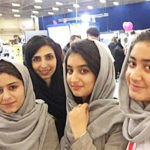 It has been a year of travel difficulties, project setbacks and family heartbreak, but a girls’ robotics team from Afghanistan has made a comeback.The group of teenagers won an award at a top festival in Europe.The teenagers, who hail from the western city of Herat, took the Entrepreneurial Challenge at the Robotexfestival, which was held in Estonia, on Nov. 24 through Nov 26, 2017.
“We are extremely proud of the wonderful accomplishments of the Afghan All-Girl Robotics Team,” Afghanistan’s ambassador to the UK, Said T. Jawad, said in a statement. “They are an excellent example for people around the world of what can be accomplished by young Afghans if given the right support and the opportunity to excel in their education.”Three of the team’s 12 members participated in the competition. Their challenge was to showcase a prototype that could solve a real-world problem, and that customers would want to buy. They won with a robot that could use solar energy to support small-scale farmers in their fields, the embassy in London said. The winner was chosen by the thousands of spectators who attended the event.The team, which had only two weeks to build its robot for the event because a shipment of the parts was delayed, won a silver medal for courageous achievement