Around the World in a Year! 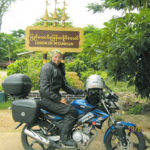 Anita Yusof, a 49 year-old lecturer from Malaysia, became the first solo Muslim woman rider to bike around the globe for a year. Exhilarated by her achievement, she says she intends to write a book on her globe travel as there were so many unforgettable experiences, incidents and events that she can share with others. “My solo feat will definitely motivate others, especially women, to embark on. I have been invited to give talks and I will share my experiences with the audience,” she said. The mother of two sons said that she is proud to become the first Muslim woman to travel solo around the globe on a motorcycle. “There is always a negative perception, especially when it comes to women, travelling to countries alone. There were instances when I visited some countries and the people could not believe that I, as a Muslim woman, was travelling alone,” she added. Anita said she had to explain that not all Muslim countries discriminate women.
With only some hard-earned savings in hand, she had to be careful with her expenses. “By God’s grace I did receive some cash and accommodation in some of the countries I travelled,” said Anita, whose bike was sponsored by Hong Leong Yamaha while GIVI Asia Sdn Bhd, (GIVI Malaysia), a manufacturer of motorcycle accessories, supported her with jackets, helmet and other necessities. She travelled a distance of 65,369km from Sept 13, 2015, and returned to the country on Sept 16 this year to make it more meaningful on ‘Malaysia Day’.