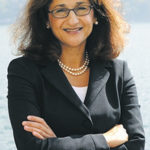 Egyptian-born Dame Nemat Shafik became the first woman to be appointed Director of LSE, one of the world’s most prestigious academic institutions.
Egyptian-born Dame Nemat Shafik is set to become the first female to ever run the prestigious London School of Economics and Political Science (LSE). The economist, who is a British and US national, resigned from her prominent central banking job as Deputy Governor of the Bank of England only two years into her five-year contract, in order to accept her upcoming position heading up LSE, according to The Guardian. Shafik , who hails from the coastal city of Alexandria will officially commence in her new position as Director of LSE in September 2017. In 2015, Queen Elizabeth II honoured Shafik for her outstanding contributions in her field and named her a Dame Commander of the Most Excellent Order of the British Empire (DBE).