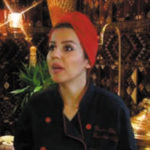 Dhoha Abdullah has become the first Saudi female chef in Saudi Arabia, where she’s become a head chef at a hotel in Riyadh. Dhoha, who holds a Master’s Degree in social services, began to improve her cooking skills after her family encouraged her and told her she cooked better food than hotels and restaurants did. Dhoha studied cooking in Lebanon and India and mastered the international cuisine in particular while adding her own touch, thus becoming an expert in the Italian, French, Indian and Syrian cuisines, in addition to the Saudi cuisine. She said many supported her move such as the minister of labour who visited her and encouraged her to pursue this career. Dhoha, who had to travel to study due to lack of culinary schools in Saudi Arabia, called on the vocational institute to open cooking institutes, adding that she is willing to cooperate with them and help others for nothing in return.