Islamic Voice 0 August, 2017 12:00 am
Women will Change the Muslim World
I wear Hijab, I am Liberated
Laws For Women, Not Against Muslims

The Muslim community in India is all set to see its first batch of women Qazis, or Islamic judges, make inroads into a domain hitherto considered exclusively for men. 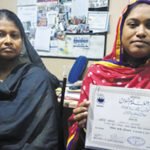 Even as the triple-Talaq controversy rages on, the Muslim community in India is all set to see its first batch of women Qazis, or Islamic judges, make inroads into a domain hitherto considered exclusively for men. Besides being trained to solemnise the nikah (marriage) and validate the talaq (divorce), they are also qualified to oversee the khula (legal separation initiated by the wife) and assess the mehr (money given to the bride by her in-laws). “I’ve placed an order for my very own seal, complete with a registration number. People in my neighbourhood have reacted positively to my decision to become a Qazi. Even the imam of the local jama masjid wished me well,” said 28-year-old Jamila Laskar, a resident of Howrah. Hakima Khatun, a mother of two, says she enjoys the “full support” of her husband and family. “Absolute male dominance among Qazis is one of the major reasons for males allowing arbitrary talaqs. A woman Qazi would ensure that wives benefit from the equal rights accorded to them by the Quran,” the 40-year-old woman added. Both Laskar and Khatun were among the 15 women who graduated from the Mumbai-based Darul Uloom Niswan (DUN), an Islamic centre of learning. Thirty women from various states had enrolled in the first-of-its-kind course in 2015. The road ahead, however, may not be smooth. Two of their batchmates from Rajasthan “ Jahan Ara and Afroz Begum, ran into trouble in February 2016, when several conservative clerics dubbed the appointment of women Qazis as un-Islamic. “But I completed my training despite all the opposition. I am eligible to solemnise the nikah now,” Ara told HT over the phone.
Suraiah Sheikh (45), who grew up in a Bandra slum, overcame resistance from relatives by convincing them that the Quran does not disapprove of women Qazis. “Once we begin practising, we will act against social evils like underage marriages and polygamy. We will also ensure that the groom provides residential and income proof before signing the marriage contract,” she said. Suraiah, along with Khatun Sheikh and Hena Siddiqi, are the first women Qazis from Maharashtra. “We know that not many will approach us in the initial days. But then, let’s not forget that this is just the start of a new trend,” said 61-year-old Khatun Sheikh, also from Bandra.
(Extracted from: hindustantimes.com)