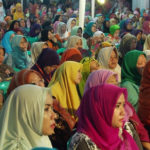 Women ulema or Muslim clerics from across Indonesia recently held their first major national gathering in Cirebon, West Java. The goal was two fold: to gain recognition for women religious scholars, and to advance women’s rights by sharing their interpretation of Islamic texts, asserting themselves as scholars and preachers of Islam on par with men. At the gathering, referred to as Kongress Ulama Perempuan Indonesia (KUPI), a wide range of socio-political issues were discussed and fatwas were issued, all of them informed by the clerics’ study of Islam and their experiences as women. The conference included discussion around the interpretation of religious texts as pertaining to women’s rights.
The idea for the gathering was born five years ago. The Indonesian Ulama Council (MUI) refused to recognize women as ulema, a position conferred based on a person’s knowledge of the Quran and Hadith. In response, various women’s groups from different Muslim organizations came together and discussed the need for a space that would empower women ulema to assert their own positions, issue fatwas and question the state.
Participants included women working at the community level as well as those immersing themselves in Islamic study at universities. KUPI also invited ulema and scholars from some other countries to share their experiences. A number of non-clerics were also present, notably secular activists who believed it was important to engage with religion in Muslim-majority Indonesia. This included Kamala Chandrakirana, who founded the country’s National Commission on Violence Against Women and who took part in planning KUPI.
“Women have been ulama since the beginning of Islam, but women’s names have disappeared from any references, thanks to a patriarchal interpretation of Islam and political history,” Chandrakirana says. Prior to the conference, as the organizing committee discussed the three-day program’s structure via WhatsApp groups, she says she realized that many women did not describe themselves as ulema. She says this shying away from owning their religious erudition explains the absence of documentation on the number of female ulema in Indonesia.
“Women ulema have created spaces in their communities for conversations that enable women to speak up and question whether Islam permits husbands to beat wives,” Dwi Rubiyanti Kholifah, Indonesia country director of the Asian Muslim Action Network says. “The ulema are able to respond from the perspective of classical texts as well as feminism.”
The gathering’s location was symbolic. It took place in the expansive courtyard of the Kebon Jambu al-Islamy Pesantren, an Islamic boarding school led by a woman, Nyai Masriyah.
In her speech at the gathering’s opening ceremony, during which several male ulema and male students were present, she said, “I have been crowned a feminist. But what does ‘feminist’ mean? It is forbidden for a woman to conform to man or any other creature, except God. She does not need a man, except as a comrade and a friend. So ladies and gentlemen, do not worry. The KUPI movement is very affectionate to men “ we will treat them with the highest respect, as much as any other creature created by God.”
The conference included several parallel sessions in which pressing issues were discussed, including sexual violence, polygamy, radicalism, peace and security, and education. Three fatwas were issued: against sexual violence, against child marriage and against environmental degradation. Even though not legally binding, fatwas can be tremendously influential.
Nenny Agustina Adamuka, a graduate student of international studies, thought she had signed up for a religious meeting, but was surprised to see that issues pertaining to women were also being discussed. “I never knew that my religion has never allowed women to be subjugated,” she said.
A visit from the Minister of Religious Affairs, Lukman Hakim Saifuddin, was seen as a clear message that women ulema were recognized as legitimate. At the closing ceremony, many women were in tears, hugging each other, ecstatic over this newfound acknowledgment of their role as torchbearers of Islam and defenders of women’s rights.
(Extracted from https://www.newsdeeply.com)