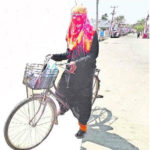 Hyderabad: Jameela, a widow of Mahboobabad, instead of mourning the death of her husband, joined her husband’s job and decided to bring up her children on her own. She works as a post woman and delivers letters, telegrams and parcels etc. from one place to another. Jameela belongs to Garla mandal in Mahboobabad district. Her husband Khaja Miya was a postman who died 10 years ago when their elder daughter was in the 5th class and the younger daughter was in the 3rd class. Jameela was facing a gloomy situation. Luckily, Jameela got her husband’s job. She became the first Muslim post woman of the postal department.
At first, Jameela didn’t know how to ride a bicycle. She used to walk and deliver letters and parcels to houses. Now she has learnt to ride the bicycle. Initially, she was getting a salary of Rs. 6000, which was insufficient to meet her expenses. So she started selling saris along with her job. Today she earns Rs. 10000 per month. Her elder daughter is doing engineering and the younger daughter is doing a diploma course.
(Extracted from siasat.com)