Islamic Voice 0 October, 2015 12:00 am
Ambreen Naeem
Zulekha Daud – From Nagpur to the UAE
Emirati Woman Finds Her Mother After 36 Years 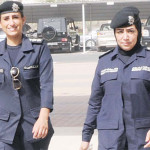 Qatar: In a historic breakthrough for women, Kuwait is recruiting female guards for the parliament in a bid to improve the security system. “Having women guards at the parliament has become an urgent necessity amid the security conditions and developments in the country,” Major General Khalid Al Waqeet, Assistant Secretary General for Parliament Security Guard Affairs, said. “Allowing female volunteers to join the parliament’s guards, for the first time, aims to deal with changes that necessitate the development of the security system,” he told Kuwait News Agency (Kuna). The women guards’ duties will include inspecting and frisking women, both staff and visitors, Al Waqeet said, adding that the new parliament building scheduled to be opened within six months will provide all the needs of the women guards.
(http://gulfnews.com/news/gulf/kuwait/kuwaiti-recruits-women-as-parliament-guards-1.1573861)