Omar, who wears a hijab, walked a long and difficult path to election, and won in a year where Muslims faced a barrage of hate crimes and threats. 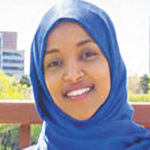 Minneapolis: In an election that starkly divided the United States on November 8, one result was a glimmer of hope for people who opposed Donald Trump: Minnesota elected America’s first Somali American legislator, Ilhan Omar.
The 34-year-old, who came to America as a refugee almost 20 years ago, beat out a Republican opponent to gain a seat in the state house of representatives. “Tonight, we are celebrating this win, our win. But our work won’t stop,” she said after her victory. Omar, who wears a hijab, walked a long and difficult path to election, and won in a year where Muslims faced a barrage of hate crimes and threats.
Omar came to the US when she was 14 from a refugee camp in Kenya, a country which hosts hundreds of thousands of Somali refugees. She learned English in three months and later obtained a degree in political science. After graduating, she became a community organizer and is currently the director of policy at ‘Women Organizing Women Network’, a group which helps empower and propel east African women into civic leadership roles. Omar becomes the first Muslim woman to hold office in Minnesota and will now represent Minnesota’s district 60b.