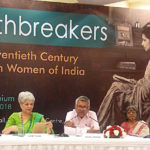 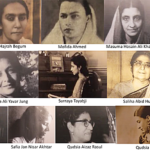 New Delhi: Far from the commonly held impression of silenced, cloistered and acquiescent Muslim women, an exhibition reminds Indians of the post-Independence contribution of some women who became role models for new generations.
Titled “Pathbreakers”, the exhibition was organised by Muslim Women’s Forum in partnership with UN Women at India Habitat Centre to celebrate the struggles of those women who broke barriers and became partners in the project to build a new India. “A multiplicity of stereotypes are constructed by diverse actors regarding Muslim women. But the fact is there is no undifferentiated ‘mass’ of Muslim Women. Like women of all socio-cultural groups, they too are a divergent, shifting composition of individuals, often dumped in popular parlance into one single heap. This homogenisation has to be rejected,” Syeda Hameed, President, Muslim Women’s Forum said.
Shedding their purdah, the Muslim women became writers, teachers, artists, scientists, lawyers, educators, political workers, trade unionists. A few even went to become MP’s, MLA’s and some represented India in international fora. “There is more to Muslim women than triple talaq, polygamy halala and purdah, and that this project hopes to bring a different image of Muslim women to the public consciousness. For the commonly held impression of silenced, cloistered and acquiescent women, Pathbreakers narrates the stories of strong, determined and engaged women,” Hameed added.
The exhibition highlighted these women who were at the forefront of nationalist and feminist struggles. The main body of their work spanned from 1947 until the end of their lives who believed in equal rights for women and projected through their work and their social engagements.
From featuring writer activist from Uttar Pradesh Anis Kidwai to Sharifa Hamid Ali from Gujarat who was one of the founding members of All India Women’s Conference (AIWC) and appointed as the Indian representative to the UN Commission on the status of women.
Other women who were featured in the exhibition are Atiya Fyzee, Atia Hossain, Aziza Imam, Fathema Ismail, Hamida Habibullah, Hajira Begum, Mofida Ahmed, Masuma Begum, Mumtaz Jahan Haider, Qudsia Aizaz Rasul, Qudsia Zaidi, Razia Sajjad Zaheer, Saleha Abid Hussain, Saeeda Khurshid, Safia Jan Nisar Akhtar, Siddiqa Kidwai, Surayya Tyabji, Zehra Ali Yavar Jung and Tyeba Khedive Jung.
(business-standard.com)