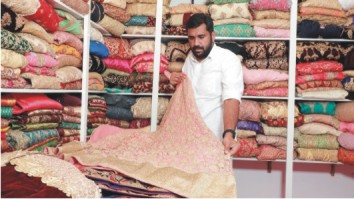 Thiruvananthapuram: Expensive bridal dresses that remain unused after a wedding are now bringing cheer to the faces of brides coming from poor financial backgrounds in Kerala.  Dress Bank offers expensive bridal gowns to women from low-income families free of cost in a new charity model.

Nasar Thootha, a native of Perinthalmanna in Malappuram district of Kerala, initiated the Dress Bank project in March 2020. In less than two years, around 200 brides from financially weak families were able to dress up for their wedding in costly bridal dresses under the project, which now has many givers and takers from many parts of Kerala and even from other states and abroad.

“At present, there is a collection of around 1,000 traditional bridal outfits that suits Muslim, Christian, and Hindu brides. The Dress Bank now has a collection of around 1,000 costly bridal dresses. The market prices range between Rs 5,000 and Rs 50,000. Contributions are coming from other states as well as from NRIs. Some financially weak families from Karnataka and Tamil Nadu had also approached the Dress Bank,” Nasar told DH.

The 44-year-old former NRI has been actively engaged in charity activities since he returned to Kerala from abroad eight years ago. Seeing the plight of many with the support of his family members and friends, Nasar initially pooled the once-used bridal dresses and started offering those to brides from poor families in the locality. His initiative garnered much appreciation and publicity through social media and word-of-mouth. Nasar then began receiving contributions from various parts of the state and outside.

Nasar says that almost all dresses he receives are used just for a few hours and are like new ones. But he dry-washes them before giving the dresses to others. Even though he does not ask the families to return the dresses after use, some families return them, he says.

Nasar initially operated the Dress Bank from his home. Still, later on, one of his friends offered a one-room shop for the venture at his locality, Thootha, about ten kilometers from Perinthalmanna town. Nasar, who is a taxi driver, generally opens the shop on Tuesdays and Sundays.

Nasar added that there are few requests for the bridegroom’s outfits. Hence, he does not have many attires for grooms.